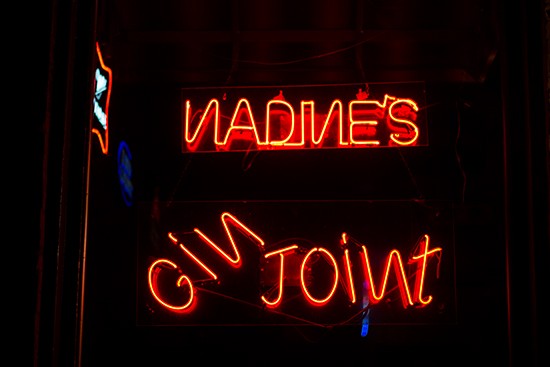 The Hours: Happy hour is offered Monday through Friday from 3 to 7 p.m.

The Scene: For more than a decade, Nadine's Gin Joint has served as a watering hole for Soulard neighborhood residents. With the recent closure of nearby Clementine's, the bar's busier than ever during prime drinking time. In warmer weather, a large patio awaits to entertain outdoors. Indoors, expect everything to be bathed in a rosy-pink neon glow, as no dive would be complete without the interior-design staple of beverage signs.

The Food: The $5 appetizer option list is short and simple. Choose from chicken tenders, blackened-chicken nachos and toasted ravioli.

Did Nadine's Gin Joint make the grade? Find out on the next page.

The Verdict: Of the three appetizer options, the blackened-chicken nachos seemed to hit the spot best. Chips come topped with a creamy cheese sauce -- our server hesitated for a second and identified it as "pepper jack sauce" -- and cubes of fresh tomato and seasoned chicken. A sprinkling of green onion tops it all off for a salty snack that pairs perfectly with a bottle or bucket of booze.

The other two dishes, however, were typical happy-hour fried foods that we wouldn't bother with again. After all, like the back wall of the dining room does read, "You can't get food like this in Paris." Despite the business' name, gin doesn't play much of a role at the bar outside of a couple common options. For cheap beer and a lowbrow social atmosphere though, Nadine's is certainly a primo spot to hit up in Soulard. 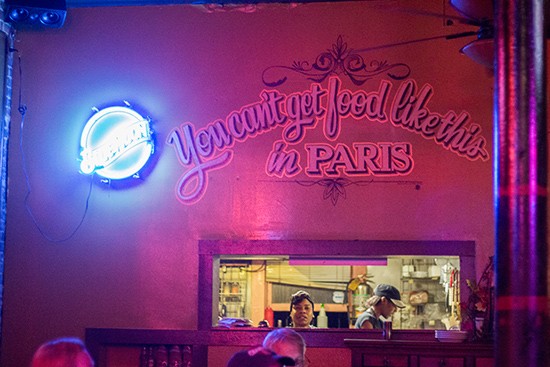