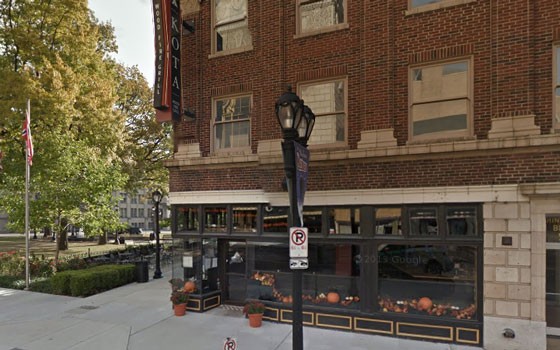 Schmitz tells Gut Check that Lücha mixes contemporary culinary methods with traditional Mexican foods. "For example, we use the sous-vide method to infuse all of our proteins with regional Mexican flavors -- chile de árbol, morita, pasilla, guajillo -- and to precisely control the temperature and texture the food reaches over an extended period of time," he says. Lücha also uses a 170,000 BTU wok to do the final braising, stewing, smoking or roasting while preserving the ideal internal temperatures and textures of the dish.

Hugo and Schmitz first met when Hugo owned the Grind Coffee Houses, and Schmitz worked down the street at Bar Italia. The restaurants became a sort of second family and support system for both -- they went on to open the late Sol Lounge together. "The relationship between the cultures of those two Central West End establishments [Grind Houses and Bar Italia] laid the foundation for what Lücha is and what I hope it is to become."

The interior decor is minimalist with lots of natural light from the large windows. The back bar is made from reclaimed wood, mostly salvaged cabinets from thrift shops. Hugo and Schmitz spent the summer building, sanding and staining.

Right now, Lücha is open for lunch and dinner, Tuesday through Sunday from 11 a.m. to 1 a.m. You can check out the full menu here.

"We are hoping to grow into the neighborhood, to be able to respond to the needs and wants of the Grand Center community," Schmitz says, "and maybe draw some new faces down to what we think is pretty fantastic part of the city."

Note: An earlier version of this post state that Lücha was only open for lunch. Lücha added dinner service last week; the hours have been updated.