Shortly after celebrating the first anniversary of its original Maplewood store, Strange Donuts (2709 Sutton Boulevard, Maplewood; 314-932-5851) debuted the second location of its growing empire. Strange Donuts' (107 1/2 East Argonne Drive) Kirkwood outpost opened on October 22, with two more unique locations -- one in the Central West End and another in Columbia -- on the way.

During its first Saturday in business, a sweet-toothed crowd formed a line down the block while co-owner Jason Bockman directed traffic at the door like an attendant at a theme-park waterslide, giving the go-ahead to groups of visitors for their time with the fun inside. The bite-size space echoes the blue-and-gray theme of the Maplewood storefront and offers classic doughnuts and "new creations" as well as the brand's signature collaborations -- dubbed "Strangers" -- over the weekends.

Racks filled with freshly fried, stuffed and glazed delights await behind the counter: Classics including long johns and glazed doughnuts will set visitors back $1 apiece, while "new creations" including a gooey-butter doughnut and maple bacon option cost $2 each. "Strangers" including a chicken-and-waffle doughnut cost $5 each, and a mixed dozen offers a discounted package at $17 a box. 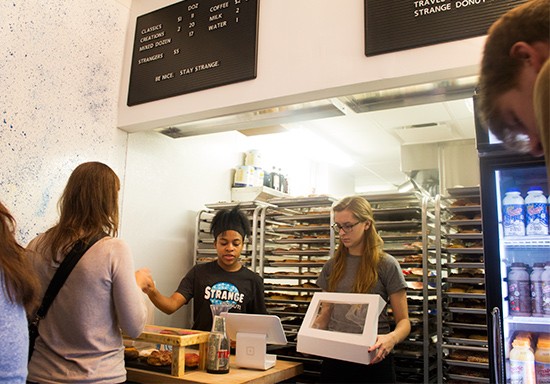