Chef Chat: Ed Heath on Moving from the Mountains to the Prairie 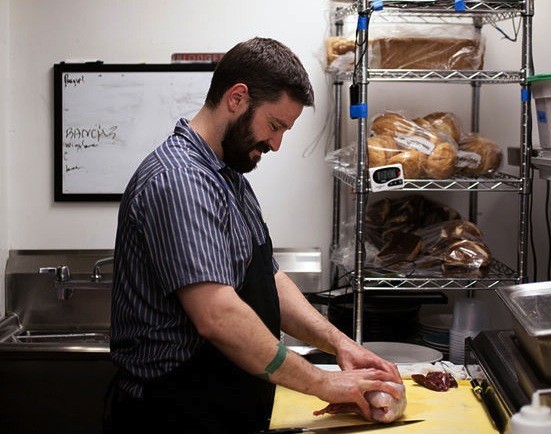 Ed Heath had a plan: cook in restaurants to support himself while in school, then start his career in natural-resource management. The path was clear for the Utah native, until he graduated, got a job working for the government, and realized something was missing. He quit, bounced around from restaurant to restaurant, and felt lost. Then he met Jenny Cleveland.

Fueled by hours-long conversations with the Bethalto, Illinois, native, Heath quickly realized his culinary calling. The pair set out for Napa Valley to hone their crafts in culinary school and work in some of the country's top restaurants. They had always planned to open a place of their own; they just didn't know exactly where that would be. California? Colorado? Utah? All had their draws, but when Cleveland's sister called with news of a space in Edwardsville, they pair packed their bags, headed to the Midwest, and opened Cleveland-Heath (106 North Main Street, Edwardsville, Illinois; 618-307-4830). If the restaurant's success and accolades are any indication, it appears that Heath has finally found his true calling.

Heath took a break from the kitchen to chat about the local food scene and dish on his not-so-secret crush -- apparently, the feeling is mutual.

What daily ritual is non-negotiable for you? Exercise.

If you could have any superpower, what would it be? How to live without money. It's the devil.

What is the most positive trend in food, wine or cocktails that you've noticed in St. Louis over the past year? As I always say, people are so good to one another here, and I only notice it getting better. Food trends will always come and go, but love, support and kindness can always be a part of your repertoire. In order for you to grow in a positive and meaningful direction, it takes effort and professionalism. Of course, I also believe in a strong and healthy dose of competition.

Who is your St. Louis food crush? My woman! I'm telling you, there is no one out there that is better suited for me. Unfortunately, she could do way better than scoring this dude -- maybe she just doesn't know it yet.

Who's the one person to watch right now in the St. Louis dining scene? It's hard to pick one person anymore because we are bursting at the seams with talent. Mateo Daughaday [Taste], the Tilford brothers [Mission Taco Joint], the whole Elaia/Olio group, Anthony Devoti [Five Bistro], the whole Libertine group, nearly everyone that works with Gerard [Craft, Niche]. I'm seriously not even scratching the surface. We have so many great and talented people. But, I am going to toot Cleveland-Heath's horn and say that I am fully convinced that we have one of the most talented chefs in St. Louis: Rick Kazmer. We call him Rikipedia for a reason. He is so humble, yet so talented and he has an incredible work ethic. He's the white unicorn. We wouldn't be anywhere near where we are without him. You should get to know him.

Which ingredient is most representative of your personality? Pickled ginger.

If someone asked you to describe the current state of St. Louis' culinary climate, what would you say? Bustling with creativity, young entrepreneurship and ready to party.

Name an ingredient never allowed in your kitchen. We are open to any ingredient, but if we can't find a use for it, then it must be pretty terrible. You'll find some stuff in my pantry that might not be up your alley, but our goal is always to make tasty food.

What is your after work hangout? In a dark room with a big glass of gin, and good music, slightly loud.

What would be your last meal on earth? Anything cooked by Jenny.