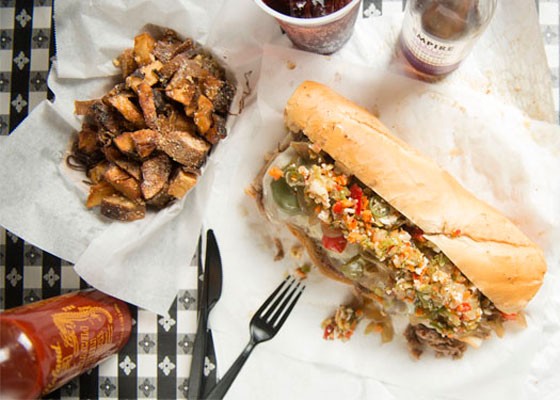 St. Louis owes Bill Bidwill a small debt of gratitude. The bow-tied owner of the Arizona Cardinals will always be hated in this town for moving our Big Red to the desert. It turns out, though, he ended up giving us a gift -- the gift of a sandwich.

Matthew "Vinnie" Mulholland was so devastated by the loss of the team that he began traveling regularly to Chicago to catch Bears games. While there, he discovered something that he loved as much as the game: Italian beef sandwiches. Mulholland's purpose for venturing to the Windy City then became twofold -- catch a game and eat as many of the spicy, jus-infused sandwiches as possible. He searched St. Louis for something comparable to no avail, and began recreating the sandwiches at home. Eventually, Mulholland decided he had the art down and decided it was time to go pro. He quit his corporate-chef job and struck out on his own: Vinnie's Italian Beef and Gyros was born.

The restaurant is, not surprisingly, a casual neighborhood spot. Guests order at the counter and seat themselves at one of a handful of tables, each covered with black-and-white checked vinyl tablecloths. The space is sparsely decorated, save for the large framed portrait of Seinfeld's Kramer. An inconspicuous door in the back corner of the room leads to a covered patio, simply appointed with some flowering vines. Most importantly, each table has its own paper towel holder -- which will soon come in handy. 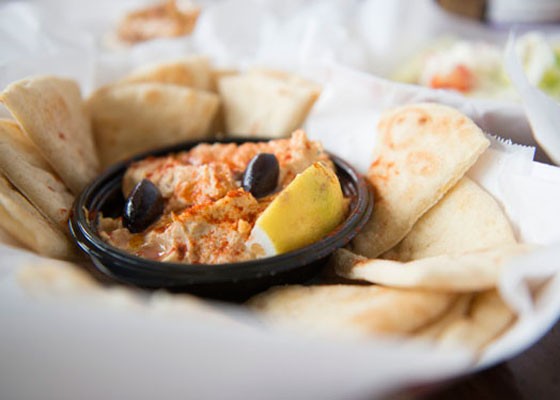 Mulholland's classic Italian beef sandwich may be made in St. Louis, but it's the real McCoy. He starts with a huge, soft loaf of Italian bread fresh from the Hill, dips both sides into warm au jus and stuffs the bread with thinly shaved roasted round of beef. Sliced provolone cheese melts over the meat, and a heap of house-made giardiniera tops the sandwich, giving it crunch and spice. Thankfully I ordered the regular size (there's an even larger "big beef" sandwich available) because it's massive -- eating-challenge massive -- but so fantastic I found myself nearly devouring the entire thing.

The Italian beef is not the only shockingly large sandwich at Vinnie's. Mulholland gives patrons the chance to overindulge with his two- or three-meat combo sandwiches. My version consisted of golf-ball-size, house-made meatballs and a hot Italian sausage link. Spiced marinara, petals of white onions, green peppers and giardiniera smothered this fiery fork-required behemoth.

Mulholland cut his teeth working at Olympia Kebab House and Taverna; George Postos, his business partner, best friend and kitchen cohort, is a full-blooded Greek. It's no surprise, then, that the Greek offerings at Vinnie's are also outstanding. The spanakopita arrived steaming hot, its molten spinach and feta center encased in delicate, crispy layers of phyllo dough. The filling was pleasantly bright, almost lemony. After her first bite, my one-year-old dining companion threw her head back, laughed, and banged her hands on the table in delight.

Vinnie's traditional gyro is a contender for the best in town. The seasoned mix of lamb and beef is cut into thick chunks, then served on warm pita with the traditional accoutrements of tomato and onion (plus feta and lettuce if one opts for the "Colossal"). Besides the plump, juicy meat, the tzatziki is what makes this sandwich unforgettable. Thick and garlicky, the sauce is the consistency of whole-milk Greek yogurt -- a decadent complement to a perfect sandwich. Fortunately, the chicken version came covered in this sauce as well -- my only criticism is that the meat was on the dry side. 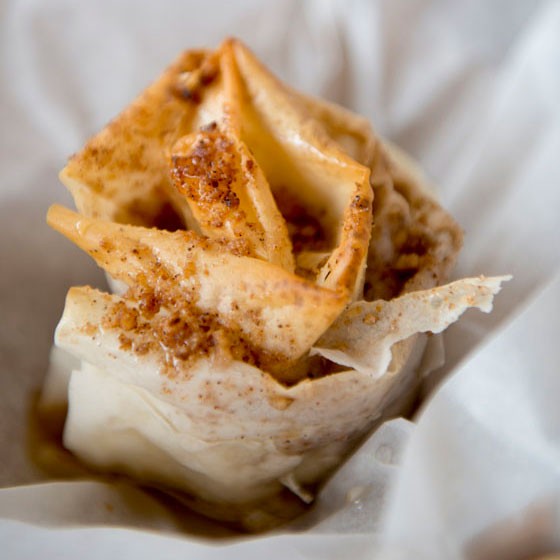 Postos follows an old family recipe for his pinwheel-shaped version of baklava. He begins with a single sheet of phyllo, fills it with chopped walnuts, then bakes it with more nuts and clarified butter. The result is a light-as-air flaky treat shaped like a rose in full bloom. Postos finishes the dish with lemon zest and cinnamon-infused simple syrup. The effect is ambrosial.

Bill Bidwell may have left our city for sun devils in the desert, but we ended up with Vinnie's (and a Super Bowl win). It's clear who got the better end of that deal.