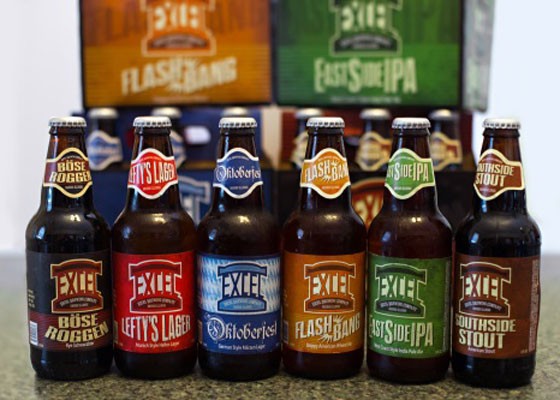 Excel Brewing Company (488 South Broadway, Breese, Illinois; 618-526-7159) doesn't get mentioned as much as the other craft breweries around St. Louis, but perhaps a new look and a new line of beers will change that. It's much more well-known for its sister operation, Excel Bottling, which has been making pure sugar cane sodas since the 1930s; beer production began in 2012.

Excel has brewed craft beers before, but all of those have officially retired to make way for the new release, spokesperson Joe Zydlo tells us. The beers are also part of an expanded distribution in St. Louis.

Look out for for the Lefty Lager, named after Excel's founder, which is an all-malt Munich-style Helles lager. Then there's Eastside IPA, a West Coast-style India Pale that's "intensely hoppy with notes of lemon zest." The Southside Stout is made with "loads of roasted barley and dark caramel malts combined with citrusy American hops." Flash Bang is an unfiltered American wheat beer made exclusively with Amarillo hops, which Excel describes as "intensely hoppy and refreshing." The Bose Rogen is a "dark, crisp and smooth" black lager brewed with 50 percent chocolate rye. There's also a limited-edition Oktoberfest.

"We have plans to continue to grow our craft-beer business alongside our soft-drink business," owner Bill Meier said in a statement.

The new stable of Excel beers are now released, so look for them on grocery and liquor store shelf and even taps around town.

"We are quite excited about our new beers because the taste testing has been quite positive on all beers," head brewer Rod Burguiere said in a statement. "Plus, we love our new simpler, cleaner more consistent look of our labeling."