CBGB Mixes the Best Sandinista -- a Shot Made with Sriracha -- in St. Louis

The "Sandinista" is a curious shot, composed mostly of tequila, Sriracha and lime juice. When it's made well, it's surprisingly good. You can find this unique and potent drink at several places around town, but the best place to order one is CBGB (3163 South Grand Boulevard).

KDHX's own Doug Morgan, host of The Record Sto', claims that even though you can find the Sandinista as far away as Chicago and San Francisco, he invented it.

"We drank a lot of 'em on our way to perfecting it," Morgan recalls.

It was about twenty years ago, and he was tending bar at Mekong's Upstairs Lounge. The shot was born of circumstance. Morgan is a little fuzzy on the origins of the name but remembers they were definitely listening to the 1980 Clash album Sandinista. "I once made 60 at once at Grumpy's in Minneapolis. It had made it there, but no one knew its name. They were calling it "Respect the Shot," Morgan says.

We can't independently confirm this origin story, but bartender Matt Wagner keeps serving it the way Morgan first made it.

"I didn't make the first one, but I drank it," CBGB bartender Matt Wagner says. "Sriracha wasn't really popular then, but it was a Vietnamese restaurant." So the bartenders came up with a tasty combination of tequila with Rose's lime juice, Sriracha, Worcestershire sauce and black pepper.

"Now people throw everything in a shaker and mix it up," Wagner laments. He still makes the Sandinista the old-fashioned way. He pours tequila and the lime juice over ice and stirs it well and then strains it into a rocks glass. Next he carefully swirls in some Sriracha and adds a dash each of Worcestershire sauce and black pepper.

The Drunken Vegan checked the label on the Worcestershire sauce at CBGB and found it contained no anchovies: another reason to order the drink there. It's a little spicy, and a little sweet with some earthy complexity, and it's easier to drink than you might think.

Still not sold on this odd-sounding combination? That's OK; there are plenty of options. CBGB is not about fancy cocktails. "Cheap and strong, that's the formula," Wagner explains. The Drunken Vegan had Wagner pick his next round. A very heavy pour of Jameson Irish Whiskey and a bottle of ice-cold Stag came to just $6. 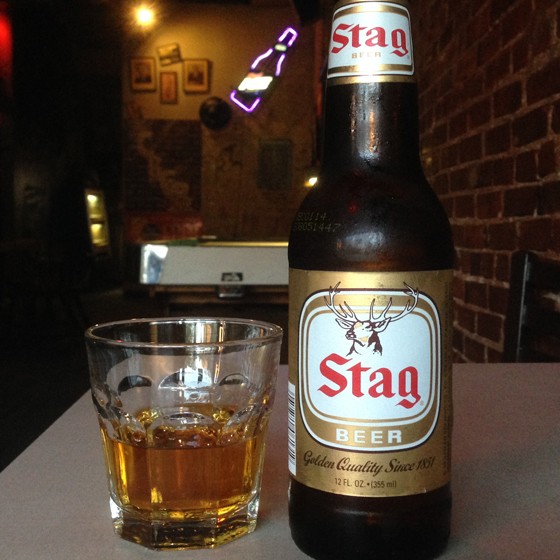