The St. Louis restaurant scene has been chattering aobut Ben Andersons' latest restaurant, Grapeseed (5400 Nottingham Avenue) since he announced it back in October 2013. His much-loved but short-lived restaurant Gist closed earlier that year from, among other things, disagreements between the partners. We've been not-so-patiently awaiting Anderson's next project all year.

Grapeseed had a little soft opening for its neighbors last night before it officially opens up, and Gut Check stopped by to check out the modern American cuisine and house-made accoutrements.

Anderson actually had his eye on the 100-year-old building that houses the restaurant as well as an apartment and office for years, and jumped on the chance when it became available around the time of Gist's demise. It's been a year-long process to renovate the building. Jermain Todd of Mwanzi Co. took several of the building's staircases and other wood and was able to turn it into tables, bars and wall coverings. 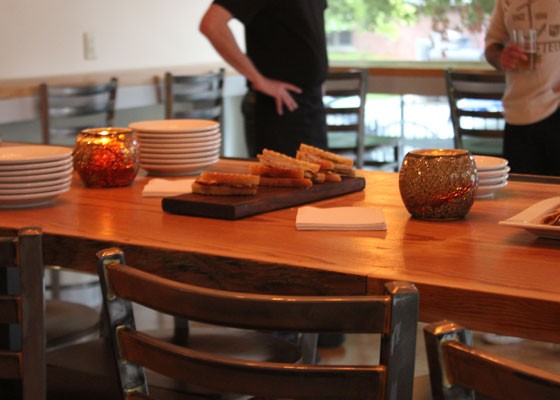 Edison bulb chandeliers provide a warm ambiance; paintings by St. Louis artists dot (or rather, splatter) the walls. Sangria master Todd Brutcher, formerly of Onesto is behind the bar. There's also a front patio and a rather charming back patio with soft lights strung up and an antique sign that was found in the basement between the drywall and earlier brick. 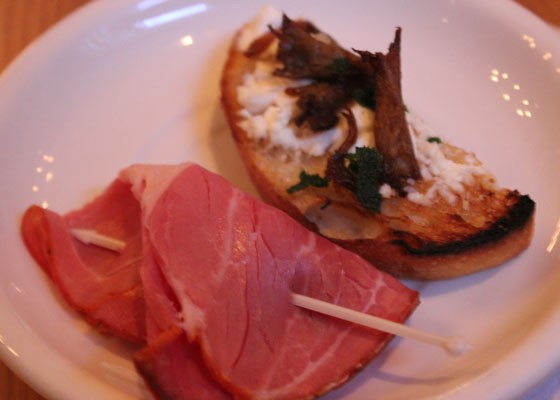 "I call it contemporary American, contemporary city dining. I'm not necessarily a white tablecloth kind of establishment," he says. "It's kind of come-as-you-are, but the foods a little bit somewhere between simplistic and sophisticated."

Anderson is using mostly local purveyors like Rain Crow Ranch, Geisert Farms and Salume Beddu -- Grapeseed will cure its own meats, but of course that takes a bit of time. Dishes, which range from snacks to small plates to sandwiches to entrees, include smoked trout cakes, butternut squash salad with buttermilk dressing, house-made pastas, five-spice salmon that can be substituted with MOFU tofu, a pork chop and roasted chicken.

Anderson wouldn't spill the beans on just when he'll be open for real, but keep an eye out this weekend. You can follow Grapeseed on Twitter and Facebook for updates.