The 5 Best Oktoberfest Celebrations in St. Louis This Fall 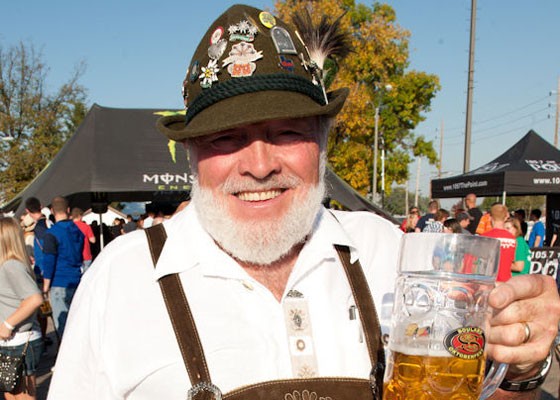 One of the great things about St. Louis is its history. We can celebrate Mardi Gras with the best of them, thanks to our French roots, but St. Louis also had a large amount of German immigrants in the 19th century (Anheuser-Busch, anyone?). Today, that mostly means we have some awesome Oktoberfest celebrations starring Germany's best export, beer. There are celebrations all over town, so grab some friends and start drinking. One heads up, though: Belleville, Illinois, won't be having an Oktoberfest this year because of its 200th anniversary celebration, which takes place on the same weekend.

Soulard seems to have a monopoly on party holidays -- Mardi Gras, St. Patrick's Day, Oktoberfest -- but we're not complaining. The historic buildings and expansive patios are perfect for drinking in the crisp fall air. This year, general admission is just $5, and there will be a carnival modeled after Oktoberfest in Munich. The festival has a new location, across from Soulard Market on Seventh Street in Soulard. The official event began in 2003, and is actually a nonprofit that raises money for Soulard nonprofits and St. Louis' German cultural organizations. Enjoy German food and beer October 10, 11 and 12. Tickets are available here.

Technically, Hermann is an hour away, but it's a historic German village that celebrates its heritage every fall (if not year round). Every weekend in October, there is live music, an Oktoberfest biergarten, winery specials, tours at the Museum at the German School and lots more culminating in a Halloween Bash Costume Party on October 25. Events begin October 4, and many are free. You can check out the full Oktoberfest schedule here.

Two of the best breweries in town are teaming up once again for the German celebration. On Saturday, September 20, and Sunday, September 21, head to Urban Chestnut's downtown location at 3229 Washington Avenue for beer, brats, pretzels, music and more. There will be six styles of beer available: Oktoberfest, Kolsch, Schwarzbier, Oachkatzlschwoaf (Fest Bier), Schnickelfritz, Zwickel and Dorfbier, plus live music from Über Cool, the Deutschmeister Brass Band, Dave Hylla's Good Times Band, Patrick Auberry's Accordion Duo, Larry Hallar, and Lucky Dan and Naked Mike. Admission is free, and if you buy an $8 stein, you get $8 one-liter refills all weekend.

St. Charles has one of the largest Oktoberfest festivals in St. Louis, featuring food, beer, music, an antique car show, a 5K and a brat-eating contest. There won't be a parade this year, but it's still a good time. The festival is free, but if you want to drink you'll have to shell out $2 for an over-21 wristband. Did we menu the dachsund "Weiner Takes All" race? Head out west to Frontier Park September 26 through 28. You can find the full schedule of events, parking info and more here.

Every Sunday in October, you can cruise the mighty Mississippi on an Oktoberfest-themed riverboat. Enjoy a German buffet of beer rouladen, bratwurst and knockwurst, sweet and sour cabbage, knoodle kugle, hot German potato salad, rye and pumpernickel breads and German chocolate cake. There is also a live German band. The cruise lasts from 1 to 3 p.m. on October 5, 12 and 19. It's $38 for adults and $18 for kids 3 through 12. Reservations are required, so call 1-877-982-1410 or book online here.