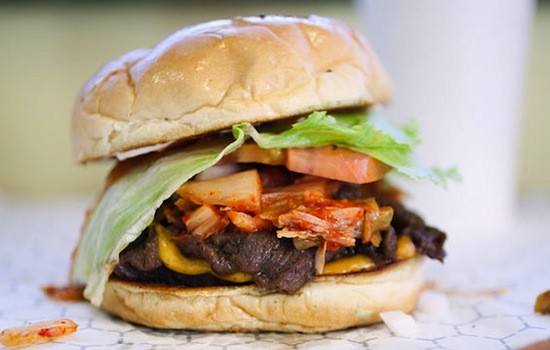 Korean-Mexican fusion restaurant KimCheese (13435 Olive Boulevard, Chesterfield; 314-485-1408) has announced that a second location will open in Creve Coeur next month. The original is inside a former Dairy Queen, but don't let that fool you. The burger is one of the best -- and we mean the best.

KimCheese has been teasing a second location as far back as March, but as first reported by St. Louis Magazine , the new fast-food restaurant will be at 10441 Olive Boulevard, which used to be an Oberweis Dairy.

Mexican, Korean and American fusion might not sound like it goes together, but somehow stuffing tacos and burritos with Korean flavor totally works. The aforementioned burger consists of slices of rib eye topped with kim chi, tomato, onion and American cheese.

We can only hope this means KimCheese will eventually become a chain in St. Louis, but let's not get ahead of ourselves. The Creve Coeur location is slated to open in mid-October.