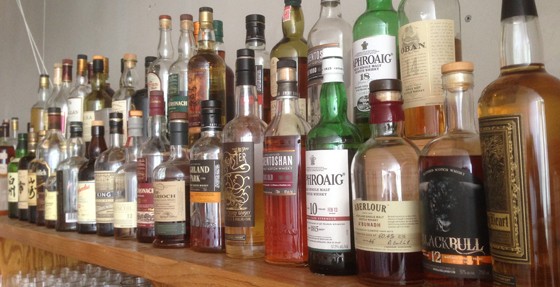 St. Louis has some great whiskey bars these days, offering impressive selections of bourbon, scotch, rye and Irish whiskey. Within the past year or so, Gamlin Whiskey House, Small Batch and Blind Tiger have all opened their doors and have found loyal followings.

But before these dedicated whiskey bars opened, the refined booze hound had to know where to look to find quality whiskey. As far back as 2006, 33 Wine Shop and Tasting Bar (1913 Park Avenue; 314-231-9463) was quietly assembling a first-rate whiskey list. The program continued to grow and now boasts 75 bottles -- many of which you still can't find at other area whiskey-centric bars.

When Joe Mooney started full time at 33, he decided to add spirits to what was known as one of the best wine lists in the city. "We had a number of local judges and lawyers who would frequent the bar, and there were many requests over the years to pick up some nice spirits from a few of them," Mooney recalls. So he began the arduous task of tasting whiskey -- lots and lots of whiskeys.

The original list was heavy on scotch, which Mooney prefers over the sweeter taste of bourbon. "I had every intention of carrying only single malts, but then I was offered the chance to carry Pappy Van Winkle and Redbreast 12 Year from Ireland," Mooney adds. And so the list grew and evolved.

Sean Netzer came on as the beer and whiskey director at 33 in 2011. The list was still mostly scotch. He added lots of bourbon, some rye, more good Irish whiskeys and even some outstanding Japanese varieties. "This was before the big whiskey fad started. We could still get anything then -- Pappy Van Winkle, Thomas H. Handy -- that's how much it changed in three years," Netzer says. He still focuses on bringing in more obscure selections. The menu reads "Please ask about the rarer stuff...We've always got surprises above the bar."

Netzer surprised the Drunken Vegan with a dram of Cask Strength Connemara Peated Single Malt Irish Whiskey. At 57.9 percent alcohol, it's not for the faint of heart. It's big and spicy with intense alcohol heat. The taste is sweet with some grass and pepper, and the finish is long with noticeable wood. Less smoky by comparison was the delicious Caol Ila 12-Year Islay Single Malt Scotch. It's very peaty on the nose and not at all sweet. There is a hint of vanilla and fruit. It's clean, smooth and balanced with a long earthy finish and plenty of smoke, without being overwhelming.

The whiskey craze may fade and the masses move on to the next big thing, but rest assured, 33 Wine Shop and Tasting Bar will keep offering a great selection of rare whiskeys to discerning palates for a long time coming.