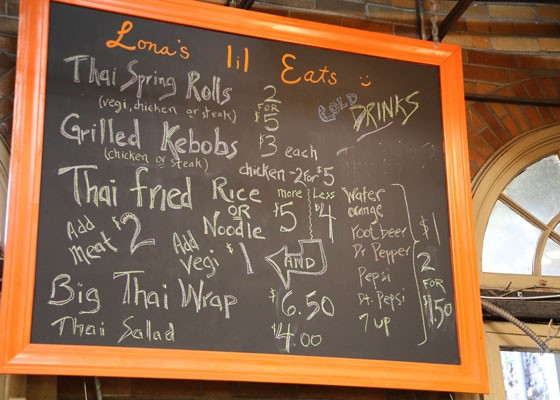 Lona's Lil Eats is well-known to frequenters of the Soulard Market, but now fans can get the pan-Asian cuisine every day of the week. Husband-and-wife owners Pierce Powers and Lona Luo found the brick-and-mortar location almost two years ago at 2199 California Avenue but faced major construction setbacks. However, the new Lona's is now open.

"It's Asian-inspired, hill-tribe-style cooking, which anyone who's been there knows it's just delicious," Powers told us back in July. "The hill tribes make really nice stuff -- a lot of pickling, a lot of curing of meats, corn liquor. Everything made from scratch."

Luo does most of the cooking; she had experience cooking in her Japanese village before she and Powers moved their family to St. Louis in 2006. Powers told us that sometimes it's difficult because the Lona's menu doesn't fit into one category of Asian cuisine.

"We say it's Asian soul food: comfort food but at the same time, light," he said. "Our emphasis is balancing sweet and spice, and sour and salt with the smokiness."

Here's a peek at some of the food: