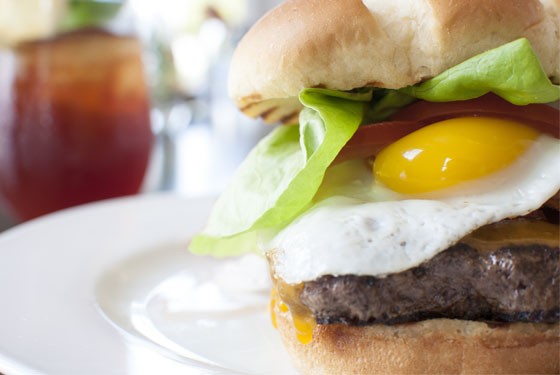 Editor's note: A previous version of this review inaccurately named Wendy Noble as the chef. She left the restaurant before our critic's visits. We regret the error.

The author is also responding to some of the negative feedback this review has received. Read it by clicking here.

A few miles off Route 370, New Town rises out of the St. Charles floodplain like the Land of Oz. The planned community appears out of nowhere, flanked by vast fields of genetically modified corn and a fiberglass giraffe hawking RVs. Once hyped as the next big thing in real estate, the development promised its residents a life that looked like the back lot for the movie Pleasantville: an escape to a simpler time when Old Glory hung from the town bandstand. Then the real estate bubble burst, and New Town failed to take off. Today, rather than a utopian enclave, it's just an "old timey" subdivision.

The Crossing at New Town (no relation to Jim Fiala's the Crossing in Clayton) is owner Kari Johnson's attempt at a community restaurant. The space is a replica of a train station made to look like it had been converted into a restaurant, when in reality it's been a restaurant all along. Inside, it's pretty in the way that an exurb display home is pretty: sixteen-foot ceilings, perfectly painted white walls with taupe accents, beaded chandeliers and a large wooden mantel meant to look like a colonial-era hearth. The outside patio is equally pleasant with a cobblestone patio, shade trees draped with white lights and a large babbling fountain.

The Crossing throws around culinary terms like "bistro" and "fine-dining," but it is neither. It's more like a cafeteria one might find in a corporate office building. A starter of thick, breadsticklike Bavarian pretzels had absolutely no salt, and the accompanying beer-cheese dip lacked zip. An "artisan cheese tray" consisted of grapes, summer sausage and cubes of cheddar and Gouda cheese, all of which looked like they were purchased at a wholesale club grocer.

The summer citrus salad was one of the Crossing at New Town's better offerings. Mixed greens, sliced strawberries and Mandarin oranges were topped with well-cooked jumbo shrimp. The shellfish had been citrus cured, giving them a faint floral flavor.

The crust for the flatbreads actually seemed homemade, but it was too thick and doughy and could have benefitted from more time in the oven. The buffalo version was sauceless and sparsely sprinkled with cut-up chicken fingers, blue-cheese crumbles and chives. The side of buttermilk-ranch dipping sauce was watery. Conceptually, the candied-apple flatbread was interesting: candied bacon, melted Brie cheese, sliced apples, pecans and a caramel drizzle combined for a sweet and salty gooey pizza, but again, there were not enough toppings to give the dish oomph.

See also: Review: Death in the Afternoon Makes Lunch the Most Important Meal of the Day

The "Galt House Porker," three pulled-pork sliders served on pretzel buns, was disappointing. Though the menu said the meat was smoked, it didn't taste like it. I'd assume the pork was simply cooked in a Crock-Pot — except then it would have been moist. Instead, it was bland and dry. I had to douse it with the sides of barbecue sauce (a cloyingly sweet "traditional" and a zesty Carolina-style mustard) to eke out any flavor.

"Mom's Crispy Chicken Salad" was the chicken-salad version of party potatoes: a melted slice of jack cheese and cornflakes topped the warm, mayonnaise-based dish. I would bet the farm that the chicken was canned. The unmistakable reddish hue of perfectly square chunks was telling.

Normally, I wouldn't review a burger at a non-burger joint, but I felt the need to do so at the Crossing at New Town — you can tell a lot about a place by whether or not it can properly execute the basics. I interjected "medium rare" when the server failed to take a temperature. It didn't matter. The patty came out well done, on an average bun with some average garnish and average cheese. It wasn't offensive — just what one could get from a kiosk at an amusement park. And the side of loaded fries? Covered with the candied bacon and shredded, grocery-store cheese.

If I were dragged against my will to New Town and needed a bite to eat, I'd order the "Spicy Hen." The pulled chicken is simmered in tangy barbecue sauce, covered with cheddar cheese and candied bacon, then piled on griddled bread. It's a respectable sandwich.

I was interested in the Crossing's "housemade" desserts until our server explained that the restaurant actually buys them in. I settled for another Schlafly.

If New Town is a soundstage trying to act like a city, then the Crossing at New Town is a one-dimensional façade trying to play restaurant. In this place for people who wanted to escape reality, all I want to do is escape.