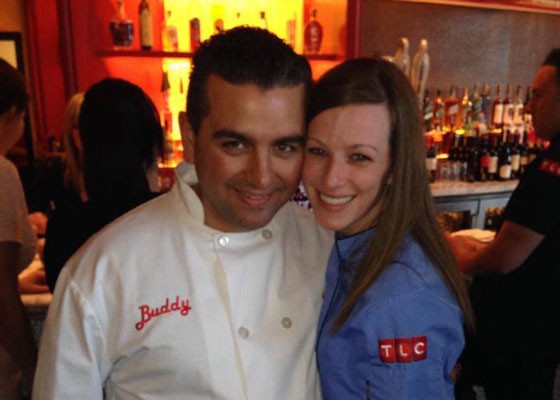 Florissant residents Lia Weber and Al Watson were announced last night as the winner of season four of TLC's reality competition show Next Great Baker. We talked to Weber about how hard it was to keep the secret, the joy of winning and what's next on the horizon.

"I fell to the ground and was crying. I was so overjoyed and proud of all the hard work we put into it over two months," Weber says of the moment she realized she had won. She actually found out back in April, since the show was of course filmed ahead of time. Weber says she just had to keep telling her friends and family, "Keep watching!"

She celebrated at a packed watch party last night at Hendel's, where she's the pastry chef. The winner gets a $100,000 prize and an job offer at host Buddy Valestro's new Las Vegas bakery. Contestants couldn't speak to Valestro until the winner was announced, but Weber says she's not quite sure if she'll move out to Sin City just yet.

"I'm waiting to see what offer he's going to offer me, and if i feel it's right for me and my future, i wont pass it up," she says. "But it'll be hard to leave St. Louis, because that's where my family and my fiance and friends are. So I'll definitely have to sit down and talk to Buddy."

And if she doesn't go to Vegas? We can look forward to a yummy pastry shop, Made by Lia. Weber already runs it as an online business, baking up wedding cakes, pastries, french macarons, tarts -- "anything sweet."

"It was an amazing experience. I'm really proud to represent St. Louis, and especially north county during these hard times we're facing," Weber says. "It was an honor to even be selected to be on the show. I'm kind of speechless."

You can watch the winning moment here: