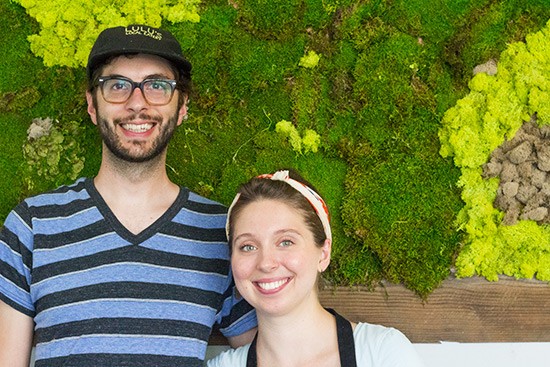 Though Lauren "Lulu" Loomis wishes she had the ability to teleport herself around the world, she's already logged quite a few miles. In fact, it was while she was in New Zealand, working on an organic farm with her husband Robert Tucker, that the idea for Lulu's Local Eatery (3201 South Grand Boulevard) was born.

Loomis didn't originally plan on opening Lulu's as a food truck, but when she and Tucker returned from the adventure, they witnessed St. Louis' growing mobile culinary scene and knew it was the right fit. Now, with a new storefront on Grand, Loomis' plans have come full circle.

Loomis took a break from tending to the restaurant's lovely garden to share her thoughts on the state of St. Louis' culinary climate and why she considers herself to be like a sungold tomato.

What is one thing people don't know about you that you wish they did? How humbled and grateful I am to be a (small) part of the enormous growth happening in St. Louis right now. I am so thankful to this community for supporting us as a food truck and now allowing my husband and I to live our dream of owning a restaurant together. It's just incredible.

What daily ritual is non-negotiable for you? My morning coffee.

If you could have any superpower, what would it be? Teleportation. I would love to travel the world at a moment's notice.

What is the most positive trend in food, wine or cocktails that you've noticed in St. Louis over the past year? The emphasis on supporting local farmers and chefs growing their own ingredients has taken a turn from trend to commonplace. This is how big change happens on a major scale.

Who is your St. Louis food crush? Qui Tran of Mai Lee. He is the happiest, most positive guy all the time. And he gives great hugs.

Who's the one person to watch right now in the St. Louis dining scene? It's difficult to name one person, but I am so excited about St Louis restaurants becoming more focused on sustainability. There are so many restaurants being certified through the Green Dining Alliance (GDA) now. I am thrilled that St Louis chefs are getting on board and making this a priority.

Which ingredient is most representative of your personality? Sun gold tomato...bursting with flavor, abundance and pure joy!

If someone asked you to describe the current state of St. Louis' culinary climate, what would you say? Vibrant.

Name an ingredient never allowed in your kitchen. Preservatives.

What is your after work hangout? Friendly's [Restaurant & Pub].

What's your food or beverage guilty pleasure? A strong IPA.

What would be your last meal on earth? A heaping bowl of fresh pasta with the best olive oil, roasted garlic and tomatoes from the garden.