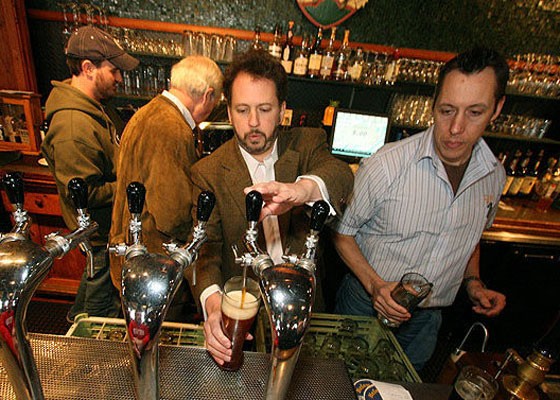 It's difficult for us to talk about, but yes, the Cardinals lost the 2013 World Series to the Boston Red Sox. Last year there were several bets going on between Bostonians and St. Louisans (though Mayor Slay stayed out of it), but our favorite was between the makers of Samuel Adams and our own Schlafly. Sam Adams founder Jim Koch bet two cases of Boston Lager and a lobster dinner that the Red Sox would win. Schlafly co-founder Dan Kopman bet some Pale Ale, a dinner at Pappy's, and an all-expenses paid trip for the winners to brew a victory beer in the losing city. Welp, time to pay up.

Last night, Sam Adams' communications director and one of its brewers (who happens to be a former Anheuser-Busch brewer as well) flew to St. Louis to collect their prize. Schlafly hosted a dual tap takeover at Flying Saucer (900 Spruce Street; 314-932-1456) with the Boston brewery with ten taps from each brewery before and during the Cards-Red Sox game.

Today, Schlafly and Sam Adams brewers are starting early at the Tap Room to brew the "Double Red Rally Cap IPA," Boston's victory brew. No hard feelings though -- both breweries will be enjoying the game tonight, with cold Schlaflys in hand, of course.

The Double Red Rally Cap IPA won't be ready for a few months, but eventually it'll be on draft at the Tap Room downtown. We're sure it'll be delicious, but let's just say when the time comes, St. Louis will be ready for a rematch -- baseball and beer.