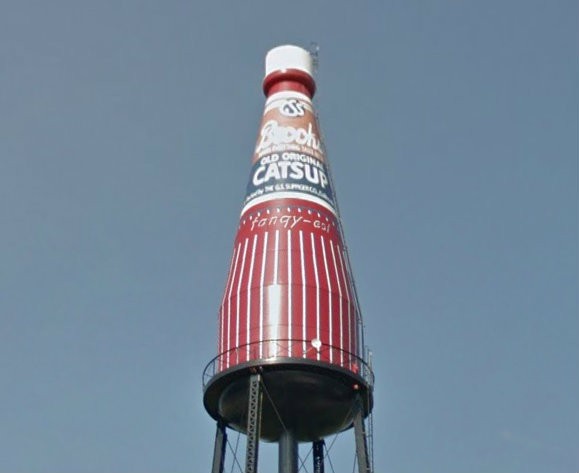 Last week we reported on the possibility of Oscar Mayer purchasing the World's Largest Catsup bottle in Collinsville, Illinois. The landmark water tower is up for sale, including the warehouse property it sits on. We thought a Wienermobile pairing would be pretty much the best thing ever. But now PETA wants to "help" -- by painting an ad over the iconic bottle.

PETA put out a release this week saying it doesn't want to buy the property, but instead, help owner Bethel-Eckerts make a little money in the meantime -- nevermind that the bottle isn't in danger of being torn down due to money issues, the property is simply not in use. The animal-rights group sent a letter to Bethel-Eckerts owner Larry Eckerts offering to buy ad space on the roadside icon.

And just what sort of ad do these folks want to place? "A woman in a lettuce bikini juggling vegetables alongside the words 'Feeling Saucy? Catch Up on Vegan Recipes at PETA.org.'" The plan, PETA says, will save the lives of more than 100 animals a year. We're all for going vegetarian or vegan (we love a good veggie burger), but come on. This graphic pretty much ruins the whole thing:

Here's the letter in full:

I'm writing on behalf of People for the Ethical Treatment of Animals (PETA) and our more than 3 million members and supporters, including thousands across Illinois, to let you know that we're fixin' to help you cover the cost of maintaining Collinsville's iconic catsup bottle while you search for a buyer who's hungry enough to bite. We'd like to pay to place a temporary ad on the bottle that features a lovely "Lettuce Lady" juggling fresh produce and reads, "Feeling Saucy? Catch Up on Vegan Recipes at PETA.org."

Our ad will help those with the bottled up desire to try vegan meals to discover an endless variety of delicious plant-based foods, such as corndog muffins, meat-less meat loaf, and falafel nuggets, that taste great with the "tangy-est" condiment. It will also remind everyone that topping veggie dogs and black-bean burgers with catsup is a delicious way to lower the risk of some of our nation's top killers, including heart disease, cancer, high blood pressure, and diabetes.

Every person who goes vegan after seeing our ad will save more than 100 animals every year from factory farms - where cows are often castrated and branded without any painkillers and chickens and turkeys are crammed into filthy, ammonia-filled sheds with tens of thousands of other birds - as well as the horror of transport trucks and slaughterhouses, where animals often have their throats slit while they're still conscious.

I hope you will carefully pour over our offer and squeeze in a few moments to contact me in order to discuss the details.

Thank you for your consideration.