Missouri Is the No. 5 Most "BBQ-Crazed" State 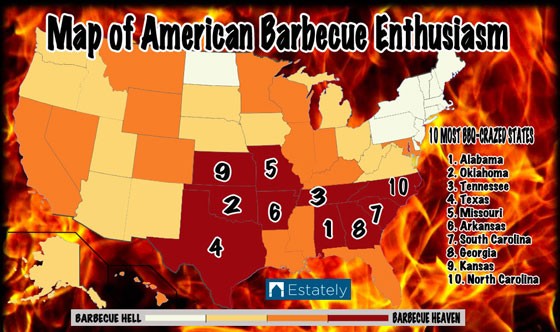 According to a new real estate study from Estately, Missouri is the No. 5 most barbecue-crazed state in the country. That's it?! Coming in at No. 1 is Alabama, followed by Oklahoma, Tennessee and Texas. Hey, at least we beat Kansas.

Connecticut came in last, which really is no surprise. All those country-club people can't be getting barbecue sauce on their tennis whites. The list was compiled based on how many barbecue restaurants per capita there are, how much Facebook interest there is in barbecue, the percentage of total restaurants that are barbecue, the amount of Google searches for barbecue and the amount of barbecue accessory and charcoal sellers.

Missouri has the fourth-most barbecue restaurants per capita, as well as the third-most barbecue-related Google searches and interest on Facebook. "Anchored by Kansas City in the west and St. Louis in the east, Missouri is a true barbecue state," Estately writes. "It has the highest number of charcoal producers in the country, and some say it consumes more BBQ sauce than any other state."

Perhaps our recent spate of barbecue openings and announcements will bump us up on the list. Until then, you can find us eating barbecue, of course.