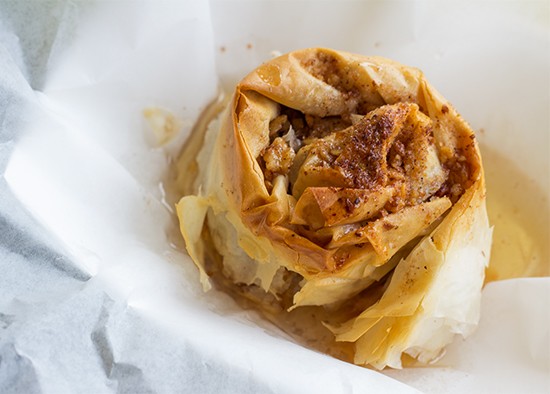 If you type the name "George Potsos" into the search bar on YouTube, you'll find one of two things: videos of his band, Honeytribe, or short cooking lessons. The bassist and chef at Vinnie's (3208 Ivanhoe Avenue; 314-664-7007) starred as "Rock'n'Roll Chef" years ago for a friend's project, whipping up some of his favorite dishes and family recipes. The how-to on his mother's baklava video only got a few hundred views, but now anyone can see the authentic Greek sweet up close just by stopping by Vinnie's for lunch or dinner.

"My mom's the best Greek chef that I know, and it's not just because she's my mom," says Potsos. "She grew up in Rhodes, Greece, and is pretty much self-taught -- she's just got the touch."

Potsos grew up in Dogtown and has worked in kitchens since he was fourteen years old. His cousins own Olympia Kebob House & Taverna (1543 McCausland Avenue; 314-781-1299), where his mother, Marietta, was a chef. Potsos worked there for nearly ten years, as well -- in fact, it's where he met and forged a life-long friendship with Vinnie's owner, Matthew Mulholland.

Seven years ago, Potsos owned a restaurant in the same space that currently houses Vinnie's, and it was there that he began learning his mother's recipes. The two worked side by side, and though she has since retired, Potsos carries on her classics including kataifi and pinwheel-shaped baklava.

The Potsos family recipe for baklava is much lighter and less sweet than the cloying, super sticky and thick version most people are accustomed to. Marietta's recipe utilizes only a single sheet of phyllo brushed lightly with clarified butter, instead of the standard stacked version. The layer of thin pastry gets a sprinkling of walnuts and is then rolled up into a pinwheel shape.

Next, more of the chopped nuts and melted butter go on top, and it all bakes in the oven until the edges become a flaky, golden brown. A simple syrup infused with lemon zest and cinnamon sticks is drizzled on top as the final touch, and the individual pinwheel-shaped baklava comes served warm -- buttery morsels melting away with each bite. We're not normally ones for tradition, but this one's definitely worth buying into.