Bishop's Post Serves "Classic Comfort" Food - But for Whom?: Review 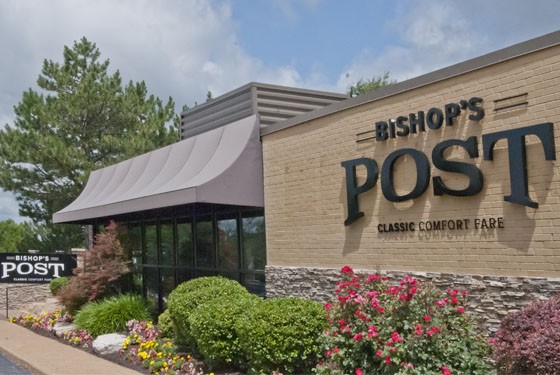 Following the dissolution of his business partnership with Amer Abouwardah, the owner of Oceano Bistro in Clayton, Ben Bishop Jr. sought to transform the Chesterfield location of the upscale seafood spot into a more laid-back, meat-and-potatoes eatery. The result is Bishop's Post (16125 Chesterfield Parkway West, Chesterfield; 636-536-9404), named after Bishop and the founder of Chesterfield, Justus Post.

Read the restaurant's website, and one gets the impression that this is a down-home Americana joint where the fried chicken sizzles and the meatloaf is Mom's secret recipe. Walk into Bishop's Post, however, and it still looks very similar to the sleek Oceano.

From the neutral color palette and stone walls to the stunningly beautiful patio, the space is certainly comfortable. The only thing that seems to have been made-under are the staff's uniforms — high-waisted jeans and T-shirts emblazoned with the words "classic comfort fare." The outfits would be appropriate for a fast-casual smokehouse, but they seemed out of place at a spot that charges $32 for entrées. This is just the first hint that Bishop's Post is not yet a fully formed concept, and it proved confusing.

Bishop's Post's menu does not help clarify matters — in fact, it muddies the waters further. Developed by executive chef Dave Rook, the offerings are part country club, part dated steak house. While to some minds that might be "classic," ahi tuna and quail breast don't exactly scream "comfort" either. That it misses the mark conceptually is less problematic, however, than the many errors of execution I encountered.

The appetizers were the highlights of the meal. The beef-tenderloin bruschetta was like a miniature, open-face steak sandwich. Thin slices of rare tenderloin — so soft they melted like butter — were placed atop sharp, melted Gruyère cheese and caramelized onions on a crostini. It came served with an entire head of roasted garlic to spread over the steak.

The sweet-corn and roasted green-chile tamale was also excellent. The moist, sweet masa was smothered in smoky pulled pork and a spicy, green-chile-flecked ranchero sauce, then finished with a sprinkle of queso fresco. Bishop's Post captured the tomato-vinegar flavor of St. Louis barbecue on the spareribs, which were meaty and soft. They didn't have much smoke, however, and it was impossible to discern the dry rub through the sauce.

The entreés, on the other hand, were plagued with problems. Although not exactly seasonal, the Maple Leaf Farms duck breast was cooked to a perfect medium rare and paired well with its sun-dried cherry port-wine reduction. Yet the accompanying bacon sweet potato hash tasted old, as if it had been cooked several days earlier, rewarmed and plopped on the plate. The boneless quail breast medallions also had the taste of old meat, though it was masked by mushrooms and leeks sautéed with a white-wine butter sauce. A side of fried spaghetti, tossed with a generous amount of Parmesan cheese, was creamy and delicious, but it lacked the caramelized texture that I would have expected from a pan-fried pasta.

The jumbo sea scallops were overcooked, bordering on rubbery. The accompanying jalapeño-white-cheddar potato pancakes were nothing more than tan mashed-potato discs — and cold ones at that. The pork rib chop was so undercooked it was almost raw, and its Budweiser bacon gravy was one-dimensional (all savory, with no spice or brightness). The caramelized onions would have helped this, but there were barely any on the plate. I must, however, give credit to Bishop's Post for having some of the best mac & cheese around. Served as a side dish to the pork, this bubbling crock of cheese, butter and toasted breadcrumbs was a decadent treat.

I finished the meal with average gooey butter cake, topped with vanilla ice cream and what seemed very much like Cool Whip. Unfortunately, the cake was served so cold that it took away from the creaminess that makes this classic St. Louis treat so special.

I have a policy of not reviewing food that I take to go (it's just not fair to judge something after it has been sitting in a box), but the execution errors on my carryout items were so egregious that they warrant mentioning. My first visit was cut slightly short by our fussy, nine-month-old dining companion, and we asked to take our dessert — bread pudding — to go. Craving a bite before we drove off, we opened the box to find it nearly frozen. On my second visit, I ordered the lamb lollipops for my partner, who skipped dinner to babysit. The lamb was grill-marked but raw inside, and its breadcrumb coating was a mushy paste. Both items ended up in the garbage.

It's clear that Bishop's Post is still finding its voice. Until then, I'm afraid diners will find little comfort in these "classics."