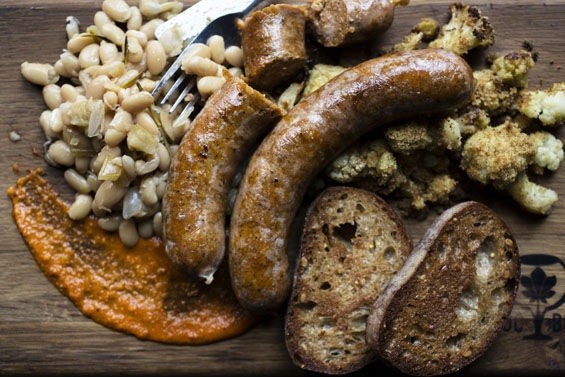 Urban Chestnut cofounders Florian Kuplent and David Wolfe call their brewing philosophy "beer divergency" — a blending of modern innovation with reverence for the past. This old-meets-new style is on full display at their sweeping new bierhall in the Grove. Walk inside, and you'd be forgiven for thinking you had stepped through a wormhole and landed in Germany. Mammoth, rustic wooden tables large enough for a medieval feast line the room, the smell of wurst and brewer's yeast fills the air, and a raucous din imbues the place with jovial energy. Yet there's no beer wench or lederhosen in sight. Instead, what stands out is how decidedly modern the bierhall feels. Polished concrete floors and industrial details look more like a contemporary loft than the Hofbräuhaus.

Chef Andrew Fair took the brewmasters' cues in developing the food for Urban Chestnut's bierhall. Having grown up going to such local institutions as the Bevo Mill, Fair wanted the bierhall's food to pay homage to St. Louis' strong German tradition without being literal. The result is a menu of reimagined German classics that pair perfectly with a night of beer drinking.

At 70,000 square feet, Urban Chestnut is St. Louis' biggest craft brewery (about twice the size of Schlafly Bottleworks), and the humongous facility looks like a battleship next to the neighboring Grove storefronts. The bierhall is housed inside of the actual brewery, and patrons eat and drink in the shadow of the massive steel fermentation tanks. Beer-tenders stand at attention, waiting to pour tastes and guide people through the current offerings.

Dining at Urban Chestnut is fast casual. Patrons order at a counter and are given a buzzer that alerts them when their food is ready. The brewery has brilliantly worked out the logistics of ordering food and beer from two different places: the two systems are synched so that diners can seamlessly add food to an open bar tab and vice versa. 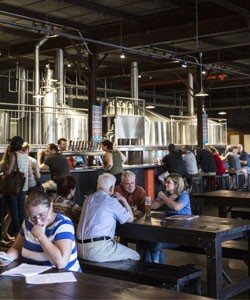 Fair acknowledges that patrons come to Urban Chestnut, first and foremost, for the beer, though his food gives the suds a run for their money. A snack of brandade beignets could have been a meal in itself. The creamy blend of salt cod, garlic and potatoes came coated in Zwickel beer batter, deep fried and served with tangy tartar sauce. The dumplings of the day, Parisian gnocchi, were much lighter and airier than their potato-based Italian cousins. Pan-frying these flour gnocchi gave them a crisp, golden exterior that paired beautifully with the colorful mélange of tomatoes, yellow squash, green onions and fresh basil that accompanied the dish.

Urban Chestnut serves three traditional German sandwiches. The obligatory schnitzel consists of a tender pork cutlet, pounded thin, coated in breadcrumbs and fried. Two slices of griddled sourdough could barely contain the cutlet; half of it hung over the edges. As such, the vinegary cabbage slaw and grain mustard garnishes could only be tasted with a portion of the sandwich. I would have liked it in every bite.

Fair also gives diners a knuckle sandwich — actually, two of them per order. The knuckles, or ham hocks, are slow roasted to the consistency of hearty pulled pork and served atop rustic wheat slider-sized rolls with a dollop of mustard and sauerkraut. The meat had a sweet, nutty flavor, but it would have benefited from something fatty to complement the ultra lean meat.

The knuckle sandwich is not the only playfully named dish at Urban Chestnut. The "Strammer Max" (essentially a "stiffy," in Saxon slang) features thinly-shaved Black Forest ham, luscious Comté cheese and an over-easy egg on buttery rye bread. Think of it as a German version of a croque madame, and let me tell you, finding a more decadent sandwich in St. Louis would be a stiff challenge, indeed.

Urban Chestnut serves a selection of wursts by the local sausage institution G&W Bavarian Style Sausage Company. I tried the Hungarian bratwurst, a garlicky, paprika-laden sausage dripping with meaty juices. Accompanying the bratwurst were sweet and smoky marrow beans, red-pepper puree, and roasted cauliflower that was topped with a heaping dose of buttery breadcrumbs. It was so good, I don't think I'll ever go the traditional bratwurst route again. You know what they say, once you go Hungarian...!

Desserts at Urban Chestnut are simple and subtly sweet. The Liege waffle has a yeasty, somewhat savory taste that is sweetened by a brûléed sugar topping. The pretzel-shaped Bavarian doughnut was like a sourdough funnel cake. After such a hearty meal, I couldn't have handled overly rich desserts. Thankfully, Urban Chestnut exercised restraint.

It's been roughly twenty years since the craft-brew movement introduced legions of U.S. drinkers to the charm of old world German beers. And while it is unlikely German fare will ever have the resurgence in popularity of its classic ales and lagers, it would be an affront to your stomach to take just your beer gut with you to Urban Chestnut. The food at this bierhall deserves equal billing.