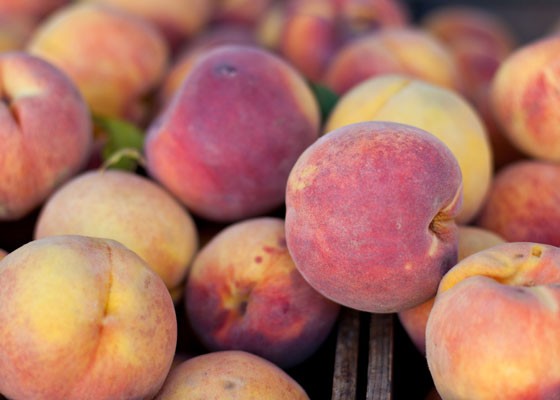 Earlier this week we listed our five favorite St. Louis foods you can only get in the summertime -- one of them was a freshly picked peach from Eckert's (951 South Green Mount Road, Belleville, Illinois; 618-233-0513). But then one of our helpful commenters shared a bit of distressing news -- this year's peach picking is canceled.

"Unfortunately it is true. We had that late storm that came through that did put a freeze on our crop," says Ashley Lake, Eckert's accounting and IT assistant (and apparently occasional phone-answerer). "It did kill some of the buds."

Peach picking usually starts at the beginning of July. The storms didn't totally wipe out this year's crop, meaning there will be some of those succulent stone fruits available at the store in Belleville and at some St. Louis farmers' markets. A few may even make it up to the Grafton store. But anyone looking to while away an afternoon in the peach grove is out of luck.

To make up for it, Lake says for the first time ever they'll be opening up a pick-your-own vegetable patch (it's BYOG -- bring your own gloves for the pricklier plants). Guests will be able to pluck sweet corn, onions, peppers, zucchini, kale, tomatoes, squash and beets, just to name a few. Eckert's hoped to offer up the patch at the same time as the peaches would usually be in season, but the cooler temperatures are stunting the growth of the veggies as well. Lake says they're hoping for mid-July.

"This is the first year we're doing it," she says. "We're hoping it goes good but we're not really sure."

Check the "Crop Update" for the up-to-the-minute intel on what's in season, and don't forget that there will be plenty of apples and pumpkins for picking soon, too.