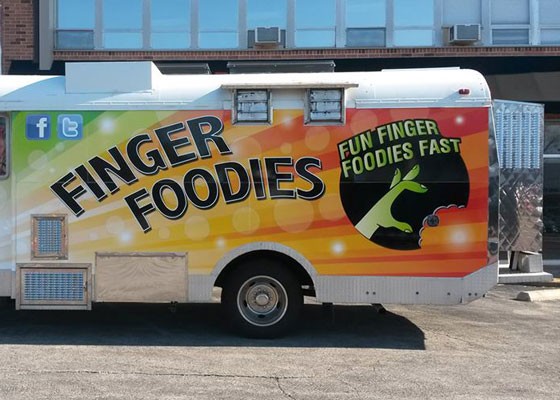 It really is food truck season -- we've got another one. The newest truck is Finger Foodies (@FingerFoodiesMO), helmed by Army veteran Esther Kim. She's all set to debut her Asian fusion dishes at Food Truck Monday on June 16 at Ferguson's Citywalk.

Most of Kim's family has worked in the restaurant business, so she swore she'd do something else. "I guess it's just naturally in my genes," she tells Gut Check.

Kim describes the cuisine as Asian fusion, because much of it relies on the original Korean recipes of her mother and uncle mixed with classic American items. The fried chicken, for example, is marinated in a sauce her uncle invented, which has a couple different Asian seasonings in it. The signature item will be cran-fried dumplings.

"I named them ugly dumplings, because they're all handmade," she says, "so they don't look perfect and prepackaged."

After Kim returned from the Army last year, she worked and went to school part time, trying to unwind and readjust to civilian life. That is, until her business partner, a friend of her uncle's, offered her the opportunity to start a food truck.

"From there, we've been planning, getting the menu together, the the proper paperwork. This is the fist business I'm doing on my own, rather than it being a family business," Kim says. "As much as my family has been involved with giving me advice, because it's my mom and uncle's original recipes, the rest of the hard work, the labor, is all up to me."

Follow Finger Foodies on Twitter at @FingerFoodsMO or on Facebook. You can catch Kim and her truck at Food Truck Monday at Ferguson Citywalk (501 South Florissant Road; 314-524-7888).