Critic's Notebook: The Case of the Missing Lobster Roll at Three Flags Tavern 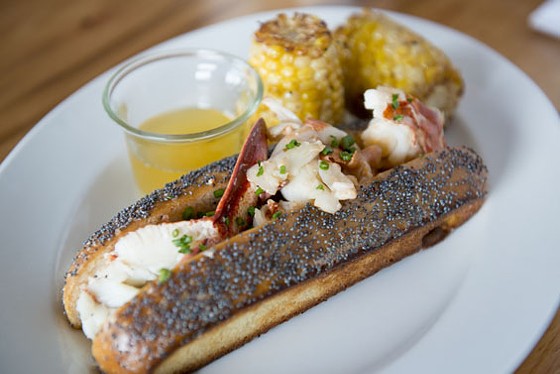 It was 12:45 p.m. on a Wednesday at Three Flags Tavern (4940 Southwest Avenue; 314-669-9222) and I had just tried -- and failed -- for a third time to order the lobster roll. The restaurant -- which I have declared possibly the best new opening of 2014 -- does everything so sublimely, but I began to wonder if its lobster roll is poised to be the St. Louis version of Big Foot. Why is it so hard to get my hands on one?

"I thought twelve to twenty sandwiches would be enough to get us through lunch," chef and owner John O'Brien says. "Obviously, I was wrong."

See Also: High-Flying Three Flags Tavern: Is this the best restaurant opening of 2014?

Well, this much is clear: The lobster roll does exist. O'Brien says its elusiveness has to do with the whole philosophy of the restaurant.

"The whole point of doing a small restaurant is so we can do things on a small scale," he explains. "It's a small space, and we don't have a lot of storage. I intended it that way. If you can't store a lot, you can't prepare large quantities of food in advance. It guarantees that everything we serve is as fresh as it can be."

Those lucky enough to experience the tavern's version of the East Coast staple choose between two different styles: Maine or Connecticut. The Maine version is what most people have in mind when they think of lobster rolls -- cold and tossed with mayonnaise.

And then -- miracle of miracles -- on my fourth try, I succeeded. I opted for the warm, buttery Connecticut version. It's worth the hype. Three Flags takes a sweet, poppy seed-flecked bun and stuffs it with a shockingly generous amount of freshly cooked Maine lobster. The meat has been poached in clarified butter, and the bun soaks it up like a sponge. If this isn't enough, the lobster roll is served with a side of the lobster-infused butter (I have no shame and dunked my roll in it) and two small pieces of fried corn (dunked in butter as well).

The lobster rolls may be fresh, but they are hard to come by. Those hoping to experience this hot commodity should be prepared to arrive early to Three Flags Tavern. And have a plan B -- an easy task at this impeccable eatery.