Happy Hour at Atomic Cowboy: A Small Taste of Fresh Mex in the Grove

The Hours: Happy hour is offered Monday through Friday from 4 to 7 p.m.

The Deal: A selection of three appetizers between $2 to $5. $3.50 4 Hands, Schlafly and Urban Chestnut beers as well as Pearl vodka and gin. 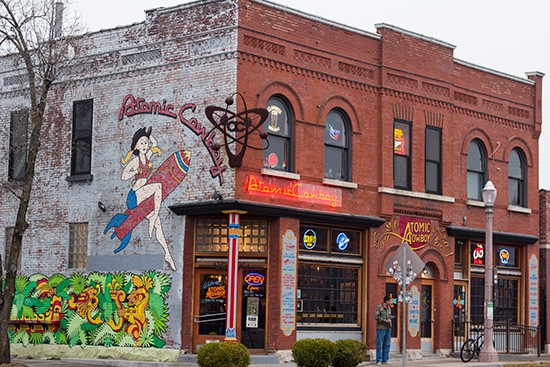 The Scene: Patrons of the Grove already know Atomic Cowboy, that hard-to-miss, mural-covered neighborhood corner bar. The restaurant and music venue has gone through a lot of changes over the years -- including expanding its epic outdoor patio, now complete with a huge stage -- but still touts its primary specialty: self-proclaimed "Fresh Mex" cuisine. The kitchen serves up its menu seven days a week in its hard-wood-covered dining room, complete with booths for sipping and snacking. 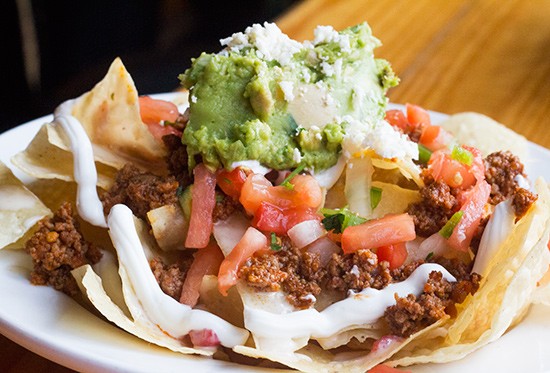 The Food: Happy hour features three items: "Gaucho fries," seasoned fries with chipotle mayo; "loaded nachos," with cheese, guacamole, pico de gallo and a choice of picadillo beef or veggies; and "Atomic wings," an order of a half-dozen wings tossed in smoked sweet onion barbecue sauce, served with a side of cilantro ranch.

Did Atomic Cowboy make the grade? Find out on the next page.

The Verdict: Aside from its nachos, the happy hour menu doesn't seem to showcase any so-called "Fresh Mex" flavors. That said, the chips slathered in queso and a good amount of toppings doesn't disappoint. The indulgent cheese sauce sits on the bottom of the bowl, so gobble up the crispy chips before they get soggy. We preferred texture and taste of the veggie option, featuring sauteed squash, over that of the standard seasoned ground beef.

The wings, dressed in barbecue sauce, will please those who favor sweet over savory poultry, but they lack a kick. The crisp fries was low on seasoning, but we liked the price. The discounted local beers are a nice touch. All in all, Atomic Cowboy's happy hour is passable at its low price point, so we recommend stopping in for a snack if you're in the neighborhood but not bothering if it's out of the way. Brunch instead, perhaps?