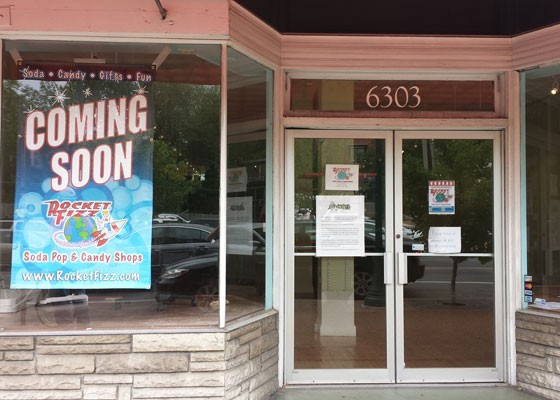 City Sprouts, a toy and clothing store for kids, moved to Clayton earlier this year, but luckily the storefront won't be vacant for long. Candy and soda-pop store Rocket Fizz (6303 Delmar Boulevard, University City; 314-833-4614) is set to take over the space.

The chain was founded "several years ago" in California by Rob Powells and Ryan Morgan, but this location will be an independently owned franchise. Rocket Fizz sells all sorts of nostalgic candy and even has its own brand of old-fashioned soda pop.

Franchisee Mark Strahm, who is opening the store with his wife Cheryl and their friend Michael Rohrbacker, learned about Rocket Fizz when his daughter Mary was watching Tanked on Animal Planet. Las Vegas fish-tank company Acrylic Tank Manufacturing was making a custom fish tank shaped like a spaceship for Rocket Fizz. They had been looking for something to franchise for some time, but nothing felt right.

"My daughter thought it was a super cool looking store, so she got online and said, 'Hey, dad, you can do a Rocket Fizz franchise!'" Strahm tells us. "And six months later, here we are."

When we called, Strahm was on location for training at the flagship store in Camarillo, California.

"I'm really kind of overwhelmed by how many sodas and candies and international candies and stuff I haven't seen since I was a kid that's out here," he says.

Rocket Fizz also sells novelty and gag gifts, such as a Smurfs thermos and Superman lunchboxes. Strahm describes it as "eclectic."

He and his partners chose the Loop because it's a hotspot for foot traffic, as well as a cross-section of many different demographics in St. Louis. "That's where you go -- that is the place in St. Louis where you find that melding of everyone coming together," he says. "It's not just a college hangout, a place where businessmen go for lunch or a place where kids hang out. And the thing about Rocket Fizz is there's something for everyone."

After he returns from California, training begins at the store on Monday, May 19, and Rocket Fizz will be open by Thursday or Friday. The Delmar location got bumped up in the franchise schedule, so it's been a bit of a whirlwind.

"They said, 'Would you mind opening up a few days early?' And we said, 'Let's do it.' We wanted to be open by Memorial Day, and now it looks like we will be," Strahm says.