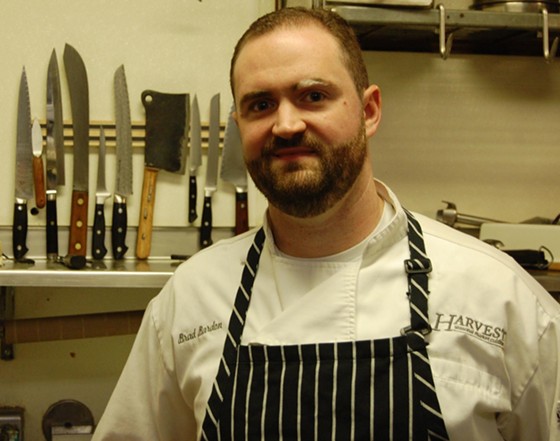 "There would be riots on Big Bend if we ever took those off the menu," says Brad Bardon of Harvest's (1059 South Big Bend Boulevard, Richmond Heights; 314-645-3522) legendary bread pudding and hanger steak.

As chef de cuisine of Harvest, the place that has been bringing diners seasonal cuisine before it was a catchphrase, Bardon is responsible for making sure the restaurant stays current and relevant. As he explains, it's a balancing act.

"We have regulars who, for years, have been coming in here multiple times a week, but we also want to appeal to a new generation of diners," he explains. "We try to balance the importance of tradition with changing things up and moving forward."

Remaining current is not much of a challenge, though, considering that Harvest was ahead of the curve with its local and seasonal offerings.

"We've always been a farm-to-table restaurant, before that was even a phrase put on menus," Bardon says. "Now that's expected. We are lucky to have longstanding relationships with small farmers who don't sell to a lot of places. Our egg supplier only sells to us, and she hooked us up with her next-door neighbor who is making this incredible butter that tastes like cheese. It's my secret weapon."

As Bardon explains, the balance between old and new is not one of tension; sometimes, the worlds collide quite beautifully. "We've been doing this rabbit dish for a little while now, and it's tilting toward the, 'We're not going to be able to pull this for a while,' side of things. It's fun to see the new items become staples."

Bardon took time away from the bread pudding to reflect on the state of St. Louis dining, the city's robust beer scene and to give a shout-out to his mom.

What is one thing people don't know about you that you wish they did? I'm a pretty private person; you don't need to know all about me. Just come let me feed you!

What daily ritual is non-negotiable for you? I take ridiculously long showers in the morning. It helps wake me up and clear my head.

If you could have any superpower, what would it be? I'd be able to fly, no question.

What is the most positive trend in food, wine or cocktails that you've noticed in St. Louis over the past year? There have just been so many great new places opening up all the time. It's seemingly impossible to get the time to check them all out.

Who is your St. Louis food crush? I have a crush on all the brewers of this city. We're a beer city at heart, and with all the great stuff being produced here now, it's something to take a lot of pride in. I love going to a beer mecca like Denver, sampling around, and then realizing that we can go toe to toe with any place as far as quality and variety.

Who's the one person to watch right now in the St. Louis dining scene? I always watch Mike Randolph. I used to work the line with him back in the day, and it's really cool to watch what he and his guys have created and evolved into over at the Good Pie. It gives me hope that maybe I could do it eventually for myself.

Which ingredient is most representative of your personality? A good solid lump of charcoal? I'm usually kind of a slow burn, not too fired up.

If someone asked you to describe the current state of St. Louis' culinary climate, what would you say? On the rise. We have a ton of talent here these days.

Name an ingredient never allowed in your kitchen. Tripe. I want to like it conceptually, but it's just gross -- makes me sick.

What is your after work hangout? If I actually get out and about, it's probably Saratoga Lanes. I love that place. It's like going home, except with more beer and a bowling alley.

What's your food or beverage guilty pleasure? Provel. Every time I talk about using it at Harvest, Nick [Miller] gives me a really uncomfortable look and changes the subject.

What would be your last meal on earth? My mom's turkey and dumpling soup. I've told her that before, but now it's official, in print.