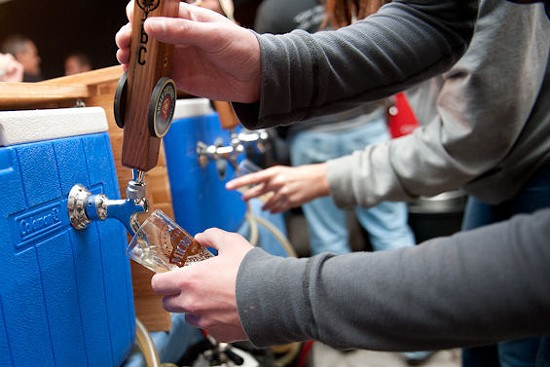 The Lift for Life Gym put on its nineteenth annual Microfest beer festival in Forest Park over the weekend. During three sessions Friday and Saturday, festivalgoers could sample beers from a very large list of breweries, near and far, small and large. The festival also featured live music and demonstrations from locals brewers and chefs. All of the fun benefits the gym, which provides services to St. Louis' inner-city youth to build self-esteem, wellness and positive life habits.

Gut Check made it down for the Friday evening session, and even though a few of the breweries we had hoped to try were not there yet (some can only make it for one or two of the three sessions for logistical reasons), we found plenty of exciting new brews to sample.

Scratch Brewing out of Ava, Illinois, brews beer with homegrown, locally farmed and foraged ingredients. They brought along their wonderful "Wild Ginger Gruit" beer. Before the extensive use of hops in beer, people generally used mixtures of various herbs, called gruit, to flavor and preserve beer. Scratch brews the "Wild Ginger Gruit" with lemon peel, and then bitters it entirely with wild ginger. The finished beer has a very light, refreshing taste with a slight tinge of spiciness at the end. 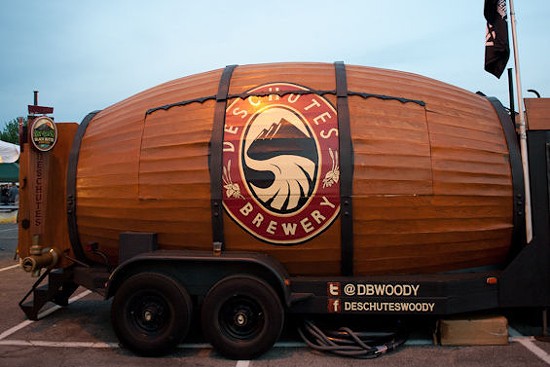 Main & Mill Brewing plans to open in Festus later this year. It brews "Triple Maple Amber" with maple sap instead of water then ages it on maple chips and adds a bit of maple syrup at the end. From the description, Gut Check expected the beer to be incredibly sweet, but it was actually very well balanced. The beer tastes light and malty with a noticeable but not overpowering sweetness.

In one of the standout cooking demos, the Scottish Arms used the "Triple Maple Amber" on a smoked pork tenderloin slider. The restaurant brined the pork with the beer before smoking it. It also topped the slider with a slaw dressed with a maple-amber ale vinaigrette made from the beer. 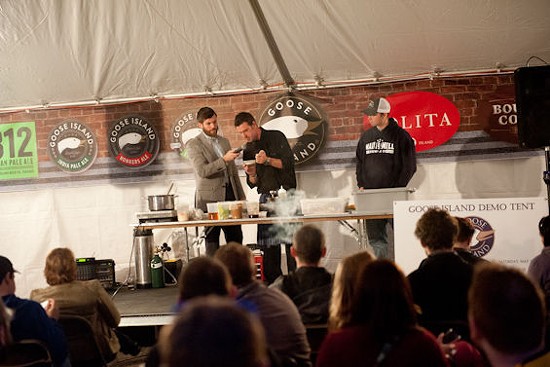 Excel Brewing from Breese, Illinois, debuted "Flash Bang" at the festival -- an unfiltered wheat ale hopped exclusively with a hefty does of Amarillo hops. The beer has a nose full of citrus and floral notes, and a smooth, sweet taste.

The standout beer of the festival for us came from Modern Brewery, which plans to open in St. Louis later this year. It made its public debut at the festival with several beers, including our favorite -- the "Modern Pale," a very crisp American pale ale with an huge hop punch. We can't wait to check this place out when it opens.

View a whole slideshow of the day's festivities here.