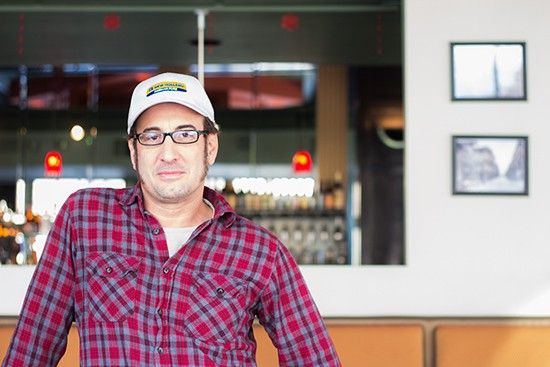 When Don Bailey spoke with Gut Check about the opening of Evangeline's Bistro and Music House (512 North Euclid Avenue; 314-367-3644), he was adamant that he does not consider himself a chef. Be that as it may, the Millstadt, Illinois, restaurateur knows how to cook up some serious Cajun food, honing his craft in the Big Easy, post-Katrina.

Bailey is quite a storyteller. Get him going, and he will talk about his travels around the world playing music for the military, the time when he was given Louis Armstrong's red beans and rice recipe, or his kitchen adventures while on tour with his former band. Here, has a few more tales for us, as well as some thoughts on the St. Louis dining scene and his pants-free, QVC after-work ritual. See Also: Evangeline's cooks up sinful Cajun cuisine with soul

What is one thing people don't know about you that you wish they did?

I grew up in the country and starting farming when I was nine -- well, baling hay and selling it at that point. Farming for real came later. Anyway, I wanted a dirt-bike motorcycle. My dad said, "Well, you have 40 acres of ground, make your own money, cut that fescue grass and bale it to sell." I borrowed equipment from the neighbor a few miles down, hired this guy that would always pee on the driver's seat because he was drunk (he called the truck "Betsy" all the time -- so ridiculous) to help me lift the bales.

The bummer was, after he drove the truck home I had to drive it back to the farm and sit on newspapers so my ass wouldn't get wet from pee, all the while barely touching the pedals and seeing out the window. I lost the first 320 bales because it rained; they molded, and I couldn't sell them. I waited four months for it to grow again, hired the drunk guy again -- ugh. Then I got smart. Made money. Got the bike.

I guess the only other thing is that I really got into cooking from playing music. I did pretty well in a little outfit called the Bob Band -- well, we did OK. We opened a little music venue when I was 27. All I wanted to do was have touring bands, play music and sell beer. Ha. I found out it was a lot more work than I imagined. It worked out OK, and I moved on from there.

What daily ritual is non-negotiable for you?

Breathing is No. 1. Taking at least one hour after work to kick back on the bed and watch the History Channel, the Discovery Channel or Animal Planet. It's usually 2 a.m. when that happens, so an hour is about all I get before the nonsense infomercials. I can't watch them. I'll end up buying crap and three weeks later when it comes in the mail, I'm like, "What the...?! Oh yeah, I remember ordering this. Wait, was I asleep with a credit card again?! Great."

If you could have any superpower, what would it be?

I don't know. Sometimes I wish I could tell my future. It sure would make life easier. But then I think, "Man, that would be boring as hell." I guess I'd like to fly. I wonder if birds have superpower dreams wishing they could sauté some ginger, garlic and spinach and swim. I'd like to be able to snap my fingers and make sad or worried people smile too. I hate seeing sad people.

What is the most positive trend in food, wine or cocktails that you've noticed in St. Louis over the past year?

It seems chefs are putting more foods on the menu that represent where they grew up, how they grew up and what they enjoyed and remembered when they were younger. Using comfort ingredients they remember from growing up, preparing them by hand and making dishes from scratch. It seems like that was lost for a while.

I like that chefs are taking regions of America they know well and specializing in that in a new way. I'm doing that at Evangeline's. I like it. It's exciting. There are some fabulous chefs in St. Louis doing things I used to only see in other cities when I was touring with the band. It's great seeing such diverse food popping up all over St. Louis.

Who is your St. Louis food crush?

Geez, I don't really know. I haven't had a chance to get involved with everyone the way I'd like to. I think Jeff Constance is a super awesome chef.

Who's the one person to watch right now in the St. Louis dining scene?

Well, I talked to Mike Johnson from Sugarfire Smokehouse at Iron Fork for a bit. The guy just rocks at what he does for sure.

Which ingredient is most representative of your personality?

If someone asked you to describe the current state of St. Louis' culinary climate, what would you say?

The coolest thing about St. Louis is that we have all these little awesome neighborhoods and communities within the city with their own styles and trends. It's like a half dozen cities in one. Every pocket keeps growing in a positive, proactive way. I love watching to see what's going to happen next. In fifteen minutes I go from Soulard to Benton Park, to the Grove to the Hill to the Loop and back to the Central West End. Then I get lost on a one-way street trying to get around the Highway 40 construction and end up at a gyro joint that I'd never heard of. Not many cities like this outside the big three.

Name an ingredient never allowed in your kitchen.

Frozen -- keep ice in my drink and under the St. Louis Blues hockey team, but not for my food.

What is your after work hangout?

My house for sure -- couch, no pants. But, I went down to Rosie's in the Central West End the other night for the first time. Good grief. I dig that place like Star Wars. They have a jukebox, nachos, and hefty shots of American Honey. Or, everywhere with original live music.

Kalua pig cooked in the ground next to West Fork River in the Mark Twain Forest; jerk chicken platter from the Jerk House in Guantanamo Bay, Cuba; any steak from Port Of Call in New Orleans, Louisiana; shrimp ceviche from the Taco Truck on Rose Avenue in Venice Beach, California; a full rack ribs from Blues City Deli on Beale Street in Memphis (which I sometimes drive straight to Memphis, pick up two racks and drive straight back home. It's really not that far to go for tasty treats); and Jagermeister.

What would be your last meal on earth?

Simple -- my mom makes the best toasted tuna fish sandwiches and cuts them on a diagonal. She made them for me all the time when I got home from school. Delicious. I never have figured out how she does it.