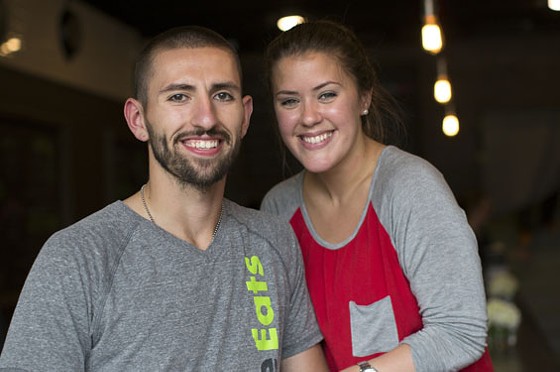 "They're really easy to work with," Angelica Lusky says of her St. Louis Cardinals clients. "Sure, the portions are bigger, but they like good food, just like everyone else."

Angelica and Simon Lusky have a special window into the lives of our beloved Redbirds. As proprietors of Athlete Eats (2837 Cherokee Street; 314-932-5566), the prepared-meal service that caters to several of the area's professional athletes, the Luskys know firsthand what it takes to eat like a St. Louis Cardinal.

Simon has been cooking for the Cardinals since graduating from Johnson & Wales University in 2010. He was recruited by the Rams the following year but returned to the Cardinals in 2012, starting the Athlete Eats' prepared-meals service shortly thereafter. As Angelica explains, it started as a small venture out of their south-city kitchen.

"We started picking up clients by word of mouth," she recalls. "The players wanted prepared meals, they told their friends and family, and it just spread. We never said no to anyone, and the way we were doing it became unsustainable. We catered Blues games out of our home kitchen. One day, I told Simon that I just can't do this anymore."

A local chef was kind enough to let the Luskys use his kitchen as a stopgap measure, but they knew they needed their own space. They rented their current spot on Cherokee Street for the commercial kitchen, but quickly realized that they had to use the front area for a restaurant. Not wanting to spread themselves too thin again, they enlisted chef Bob Brazell (Monarch, Entre, Gringo) to head the café side of Athlete Eats. There, Brazell consults with Simon on the nutrition portion of the operations, but, as Angelica explains, the menus are all his.

"We didn't go in thinking we would open a restaurant," Angelica says, "but we couldn't not do something with that space."

Thankfully for hungry St. Louisans, the Luskys aren't good at saying no.