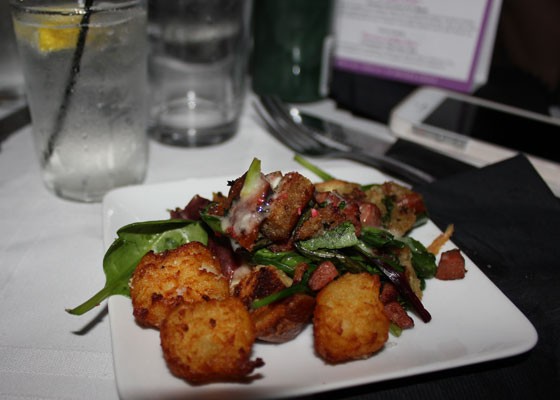 Tenacious Eats is the most ephemeral of all pop-up restaurants. There's a completely original menu for just one night -- sometimes two -- and then it's gone forever. Chef Liz Schuster and her team create gourmet five-course dinners that will keep you coming back, even if you can't taste that local rabbit with with morel mushrooms, prunes, juniper berry, garlic, white wine and fresh thyme ever again.

The craziest part may be, though, that all of this starts with gas-station fried chicken.

"We have Red Bull and gas-station fried chicken," Schuster says as she sits down at the spread in the back of Meyer's Grove. "It's kind of our process." There is also plenty of alcohol, candy and chips. People think chefs eat great, she laughs, but they don't.

On a snowy February evening, Schuster and her Tenacious Eats team -- Meyer's Grove owner Dan Stoner, emcee Jeremy Whaley and pastry chef Steve Schmidt -- are watching Mean Girls for the umpteenth time to work out the menu for an upcoming dinner. The team has already watched The Life Aquatic with Steve Zissou to finalize the menu, which is almost entirely done. It rounded out Tenacious Eats' Wes Anderson series a few weeks later.

March 25, the first night of Mean Girls, was Stoner's birthday, and he requested the Tina Fey classic -- it just happened to coincide with the movie's tenth anniversary (feel old yet?).

During planning, though, when they switch from The Life Aquatic to Mean Girls, it's clear everyone has seen this movie about a million times. They're all reciting the lines along with Lindsay Lohan and company.

Schuster has a stopwatch to time how long they go between courses. Mean Girls is only 96 minutes, so the first course will probably have to go out before the movie even starts. There are a lot of cafeteria scenes in the high school flick, so several courses are Schuster's riffs on lunchroom fare.

"I want this to really be badass, so I'm thinking about making my pickled onions on a tempeh burger with spicy harissa," she says. "I think it would be fun to serve it with a really spicy harissa aioli, because they're like welcome from Africa! And harissa is a spicy African sauce. That'd be really fucking yummy to do my black-bean hummus with the tempeh."

Schmidt throws around the idea of some sort of Red Bull-based cocktail, since that's all high schoolers seem to drink. Well, that and Diet Coke. Schuster suggests having Stoner, who creates all the cocktails, pour the drink into Red Bull cans, but the tops would have to be cut off. "You just want to cut things and smash things and set shit on fire," she teases Schdmit. "We could use straws."

She goes back to the menu. It's the part of the movie where Regina George says she's only eating foods that have less than 30 percent calories from fat -- only to give up and get cheese fries.

"Kill me over this, but I love yucca fries. She's going to get cheese fries, so we could do nice little yucca root pomme frites," Schuster says. "I think that would be really, really, fucking awesome. I have to figure out what cheese I'm gonna use. I think that's kinda funny."

The "main" course (at Tenacious Eats, there really isn't a main course) is coming right after intermission, and inspiration hits to serve it in a cafeteria-style lunch line as guests file back into the room.

"And you could all be in lunch lady hair nets!" Whaley exclaims.

"I don't want to be a lunch lady!" Schuster faux-pouts.

There is some worry over diners thinking this means they can pick and choose their course. Schuster says nobody will say to a chef's face they don't want something; they just send nasty e-mails afterward.

"For The Jerk, some ladies Facebook messaged us and said, 'I can't eat escargot.' So we made them eat grilled cheese," Whaley giggles.

When it comes time for dessert (Spring Fling, of course), a haute Kalteen bar is obviously the way to go. Schmidt proposes a peanut butter and oatmeal-type bar.

"Maybe we'll make almost like a Rice Krispie kind of base with some oats and chocolate on the bar, and we'll cross it with a peanut butter sauce and chocolate ganache," he says.

After the menu is (mostly) hashed out, there's some logistics talk. After several hours, Schuster feels pretty satisfied and closes up her MacBook. She says it's probably the sixth or seventh time she's watched Mean Girls just for this event. But it's worth it a few weeks later when over 100 diners crowd into the back room at Meyer's Grove and gobble up Schuster's masterpiece.

Next: The finished product. 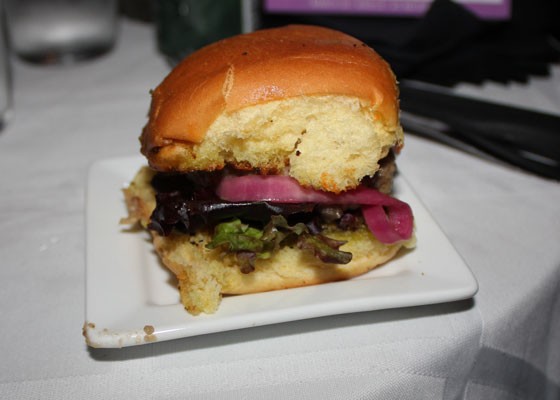 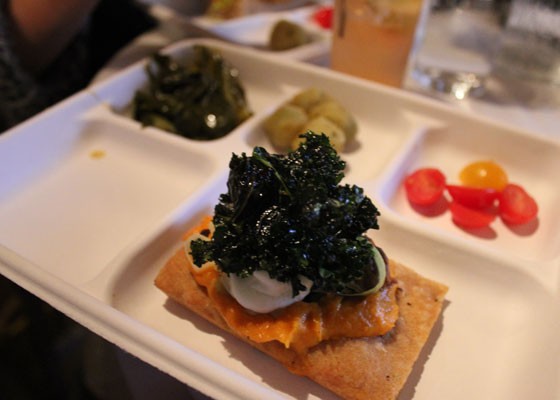 You can get Schuster's one-of-a-kind meals at several upcoming film screenings: A League of Their Own on April 24, which benefits Dining Out For Life; Mamma Mia! on May 1; Steel Magnolias on May 11; Bridesmaids on May 14 and 15; and Forrest Gump on May 29. You can get tickets and more information here.

Gut Check is always hungry for tips and feedback. E-mail the author at [email protected] or follow her on Twitter.