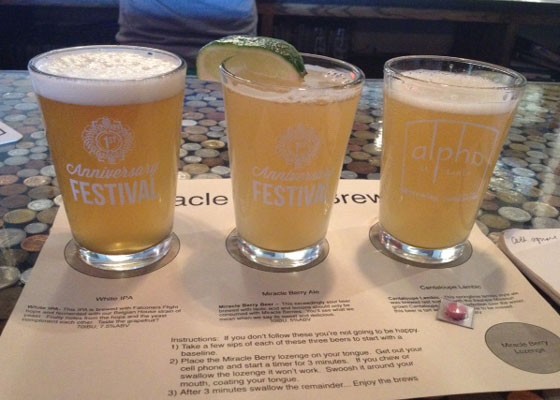 Before we tried to Miracle Berry Beer at Alpha Brewing Comping (1409 Washington Avenue; 314-621-2337), we were warned that it was a bit like Alice going down the hole in Alice and Wonderland. "Everything changes," they said.

We knew it would only be our taste buds, but we were still a little nervous. How crazy could it be?

The miracle berry tablets, which you can order online like Alpha did, are made from the "miracle fruit," which causes you to taste sour things as sweet. Head brewer Derrick Langeneckert says it was his wife's idea to do it at the brewery. "She's smarter than me," he laughs.

He pours us a little flight of three beers: the White IPA, the Miracle Berry Beer and the Cantaloupe Lambic. We're also given a slice of lime for reference. We pop the miracle berry table in our mouth and swish it around for three minutes. It's coating your tongue, but it adds some anticipation, too. After the three minutes are up Langeneckert advises us to start with the Miracle Berry Beer. 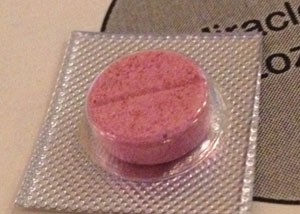 It was a fine, normal light beer before the miracle berry, but after, it was like lemonade. Really, really sugary lemonade. The lime was no different -- if there were really such a sugary-tasting fruit, perhaps we wouldn't have an obesity problem.

The White IPA tasted somewhat different, but the Cantaloupe Lambic tasted almost like a fruity cocktail. It's definitely a weird sensation. We even ate some pickle slices, which weren't sour at all.

Alpha only has about a half barrel of the Miracle Berry Beer, so it's available as long as it lasts. The three-beer flight with the miracle berry tablet is $15. And should you be so inclined, you can get your own miracle-berry tablets here.