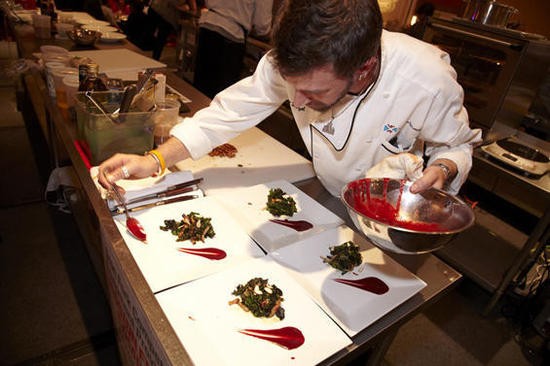 I had the pleasure of meeting chef Carl Hazel at Riverfront Times' Iron Fork 2014 event. We were both judges for the chef competition, and I have never met someone so excited about liver. As the four chefs prepared their offerings, Hazel could be overheard, circling the pop-up kitchen, saying things like "Nose to tail is what it's all about," and "It's a celebration of the offal!"

The Scottish Arms (8 South Sarah Street; 314-535-0551) chef took a break from cooking the variety meats to chat about his St. Louis food crushes, Dave Murray and his last meal on earth. Surprise -- it involves a whole animal extravaganza (and a side of chicken skins).

What is one thing people don't know about you that you wish they did? I do love the city, but I'm a country boy at heart.

What daily ritual is non-negotiable for you? Morning coffee, check on the garden....toss the frisbee a couple time with my dogs.....off to the kitchen!

If you could have any superpower, what would it be? I would definitely fly! I really just need an excuse to wear a cape!

What is the most positive trend in food, wine or cocktails that you've noticed in St. Louis over the past year? I feel like the trend is moving toward smaller, more intimate spots serving simple, rustic, approachable food.

Who is your St. Louis food crush? Probably Kevin Nashan [Sidney Street Cafe]. I've never seen a plate of his that I wouldn't publicly make out with. Josh Galliano [the Libertine] is running a close second. I like his playful takes on comfort food.

Who's the one person to watch right now in the St. Louis dining scene? John Perkins [Juniper] is killing it right now. Brad Hoffman [Planter's House] is a strong up and comer as well. Also he's always wearing some sweet kicks.

Which ingredient is most representative of your personality? Toasted hazelnuts.

If someone asked you to describe the current state of St. Louis' culinary climate, what would you say? I'd say we are in a warming trend. Thank you Dave Murray.

Name an ingredient never allowed in your kitchen. Iodized salt..... not allowed in my home kitchen either.

What is your after work hangout? The Scottish Arms patio, my patio at home with my wife, dogs and a pint/glass of wine, maybe a visit to Broadway Oyster Bar or Beal for some blues. The resounding theme here being outside on a patio!

What would be your last meal on earth? Suckling pig -- nose to tail, leafy greens and a nice piece of fish, maybe monchong, turbot or opah, just three of my faves. Or maybe just a huge bucket of chicken skins fried in duck fat.