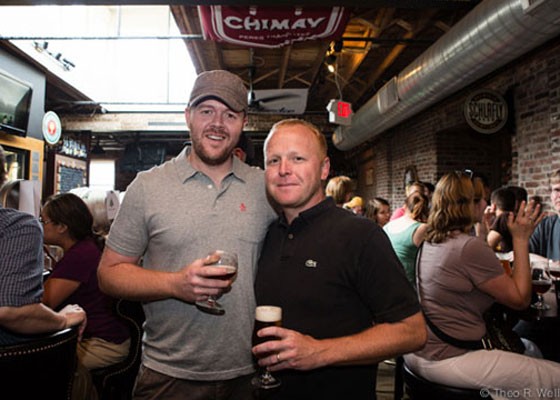 Head brewer Cory King wanted to keep the news under wraps, at least until he was further along in the process. But word got out that he is opening a new beer-tasting room for Side Project Brewing, the Cellar, in Maplewood at 7373 Marietta Avenue after the city granted his liquor license this week.

See also: Side Project Brewing Gives Us a Sneak Peek

"I've had some misinformation go out in the market already," he tells Gut Check. "We haven't even started the build-out."

Side Project is King's, well, side project; his day job is brewing up beers for the excellent Perennial Artisan Ales (8125 Michigan Avenue; 314-631-7300). Side Project debuted its first beer in September. Beer geeks camped out for hours to make sure they got a taste of "The Origin." Many didn't. As you can imagine, the limited quantity of "Origin" bottles sold out, and it won't be brewed again because of its complexity. Other hotly anticipated releases included the "Saison du Fermier" and "Brett Project #1."

King has been working on a Side Project tasting room for a while, but says he wasn't pushing it. It just sort of fell into place. Since he's got access to the Perennial facilities, King wasn't scrambling for a location. He didn't even have a real estate agent. Maplewood was ideal because of its foot traffic, central location and support of small businesses, he says.

"Maplewood has been so supportive," King says. "It's a tasting room for a brewery -- it's not a late-night bar. It's more laid-back, so I need to place my business in an area that supports our concept. Maplewood fits that plan."

King says he has been surprised and overwhelmed by the support for Side Project. "People have been absolutely spectacular. Without their support, this tasting room wouldn't be happening," he says. He intends the tasting room to make it easier to get Side Project brews, news which will surely be met with much relief in the craft-beer community.

"It will help me spread out the beer a little bit more. Hopefully there wont be mad rushes, and it'll be more calm releases. I'm trying to make everything easier," he says. "The last thing I want is for the customer to be frustrated because it's hard to get."

We'll let you know when King sets an opening date.