A Blind Taste Test of 5 Doughnuts Including Strange, World's Fair and, Yes, Schnucks 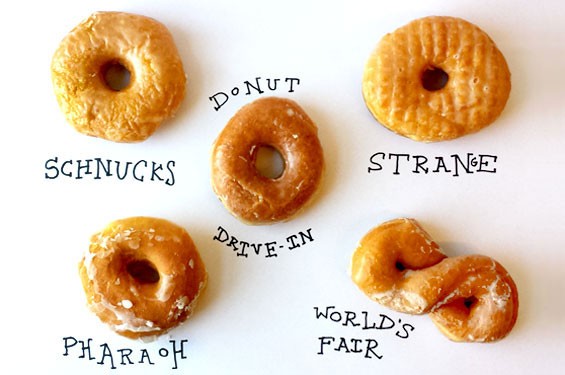 Doughnuts are having a moment in St. Louis. From the crazy collaborations at Strange Donuts to the old-fashioned breakfast pastries at World's Fair, they've come along way from cops in coffee shops. Everyone has a favorite, but we decided to put some of the city's best doughnuts to the test -- a taste test, that is.

A few caveats. It should be noted that these were not 5 a.m., straight-from-the-fryer doughnuts, which does make a difference. We usually say "no thanks" to Krispy Kremes, but how can you resist one hot off the conveyor belt? We should also note that World's Fair was out of its normal, ring glazed doughnuts so we opted for the glazed twist, which was the next closest thing.

RFT staff members tried samples of the five different doughnuts, identified only by number and ranked them. Votes were then tabulated. Tastes were, of course, varied, but there was a clear winner:

One taste tester couldn't believe her own picks. "I knew I liked Pharaoh, but I didn't know I liked them that much!" she said. "Also, bummer, I always thought World's Fair were my favorite. Life changing!"

Do you think your favorite could stand up to a blind taste test? Were you surprised by the results? And whose doughnuts should we pit against one another in round 2?