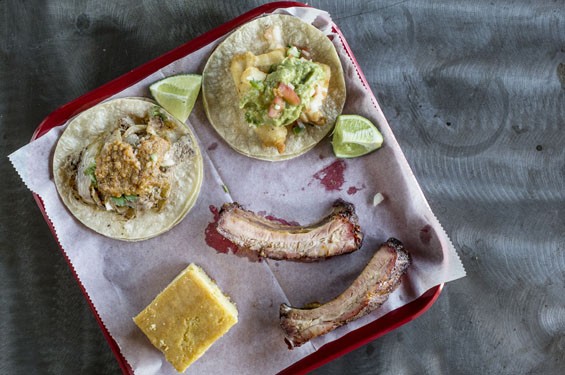 This week, I visit Spare No Rib (2200 Gravois Avenue; 314-202-8244) to investigate Lassaad Jeliti's culinary clash of cultures -- an unlikely marriage of tacos and ribs. Here is a sneak preview of my thoughts -- the full review will be online tomorrow and in this week's issue.

Lassaad Jeliti clearly remembers his first taste of Mexican food. He was a graduate student at Washington University, working part time at Bar Italia, and one of the cooks brought in tacos for his lunch. "It tasted like home," the Tunisian expatriate recalls. "The flavors, the salsas, the spices; it was like being back in Tunisia."

When the same line cook later brought in barbecue, Jeliti was blown away for the second time. Here he was, thousands of miles from home, tasting the same flavors he could get from street vendors in North Africa.

Before I learned this background, it seemed like Spare No Rib, Jeliti's Benton Park restaurant, might be a mess. A barbecue joint and taqueria opened by a Tunisian mathematician sounded like a potentially disastrous hodgepodge. Then I heard Jeliti animatedly detail his culinary epiphany, and it seemed so obvious. The spices, the grilled meats, eating with the hands -- as he says, "It's all street food."