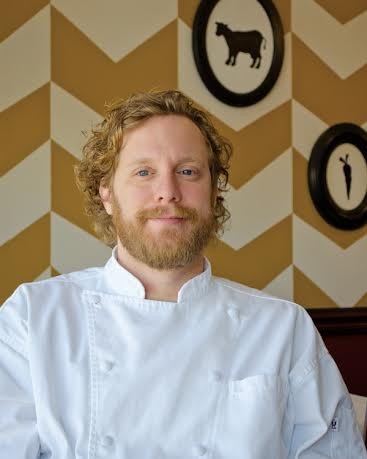 Some would see a nationally acclaimed restaurant as the pinnacle of success and allow themselves to coast. Not Anthony Devoti. The Five Bistro (5100 Daggett Avenue; 314-773-5333) chef and avowed local food champion is pushing himself into new waters with another restaurant -- sort of. The chef, with the help of his father and uncle, converted part of Five Bistro's bar into a "restaurant within a restaurant" which will rotate concepts. The first is Mon Petit Chou, which runs through April 12th and features a five course tasting menu of rustic French fare.

Devoti took some time away from the kitchen to share with us his thoughts on the St. Louis dining scene, food crushes and his last meal on earth. Spoiler alert: it sounds like a raucous good time.

What is one thing people don't know about you that you wish they did? I really enjoy hockey, I play on a men's league team, with some guys in the wine industry, our name is the GrapeCrush. We are a rag tag group of badass dudes, doing our thing on the rink.

What daily ritual is non-negotiable for you? I would assume my answer is probably fairly common with most folks....coffee, I enjoy a nice strong cup of rocket fuel to start my day.

If you could have any superpower, what would it be? I feel that the powers of Superman would be the best, I don't feel that I could really narrow it down to one power, flying, x-ray vision, super strength! I would take it all.

What is the most positive trend in food, wine or cocktails that you've noticed in St. Louis over the past year? Things are changing so much it seems year to year, nobody is giving things a real chance to settle in...so I guess I would say, the same thing I have been saying for a couple of years. The farm-to-table or garden-to-table movement, I think are the most important things that have happened in a long time. We are finally starting to understand as a society that it is important to know where our food comes from and how our animals are cared for. In the cocktail end of things, I like traditional and classics, the old coming back and being the new again is great. A classic is a classic for a reason.

Who is your St. Louis food crush? Luca Devoti (my son), he's three and every time he comes to see me at the bistro he asks to help make cookies or bake cakes, puts a smile on my face every time!

Who's the one person to watch right now in the St. Louis dining scene? I don't get out much, so this is hard for me to answer. I have a list of spots that I haven't been able to try that I just want to go to, because of what I hear from people on the streets or because I've met them at events or they have been kind enough to check out my place...Cleveland-Heath, the Libertine, Juniper, Elia, Olio.

Which ingredient is most representative of your personality? Saffron -- expensive, delicious in many ways.

If someone asked you to describe the current state of St. Louis' culinary climate, what would you say? Moving in the right direction, six James Beard nominations, new inventive places opening. It is a positive for the region and for our city.

Name an ingredient never allowed in your kitchen. Factory-farmed meats and produce.

What is your after work hangout? I don't get to go out at all really for a late night cocktail.

What would be your last meal on earth? An outrageous roast, like something from a story of a Nordic God....whole roasted beast, loads of vegetables, wine and beer that wouldn't end...no forks just gluttonous, delicious and really dirty fun. A big party, it needs to be memorable, we may not be back.