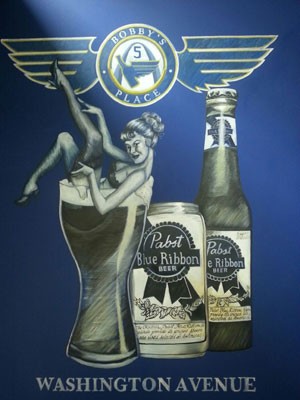 "I would classify it more as the flagship," manager Tom Mauer tells us. "It's a party bar."

Bobby's Place downtown was slated to open Friday, but as usual, building permits got in the way. Mauer says there's a chance it'll even open today. The space has eighteen-foot ceilings, fifteen TVs, a DJ booth and a separate lounge space. Bobby's Place is a good old-fashioned bar and grill during the day and happy hour, but around nine it turns into something a little more raucous. At least that's what management is hoping.

The decor is similar to the other locations and somewhat hockey-themed. Plager's Lounge is a semi-separate space, with open doors between both sides. The lounge will be a bit quieter, more laid back, with special cocktails and draft beers. The bar side has "a real neat layout for partying and having fun." You can even dance on the bar. But you didn't hear it from us.

Of course, Wash. Ave. has a pretty vibrant bar scene, so it was the perfect spot for the new Bobby's Place. Mauer says they knew they wanted to come downtown and looked at other areas like Soulard. Ultimately, the Stan Span bridge opening and improvements like the new SLU Law School cemented the decision.

"We just like the district -- we think it's turned the corner in terms of being on the upswing," Mauer says. "The new bridge kinda dumps into Tucker and we're 100 feett east of the intersection at Tucker and Washington. It seemed like a good move all in all."