Taste of St. Louis Owner Says He Was Pushed Out By Summer Rocks 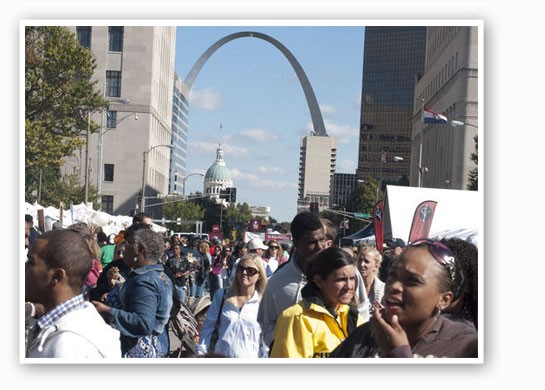 In case you haven't heard, people are pretty upset about Taste of St. Louis moving to Chesterfield this fall. At first, owner Mike Kociela told us, it was simply a matter of making the event more regional -- a logistics issue. Yesterday, though, we went to the board of aldermen meeting concerning Summer Rocks, a music festival that wants to come to St. Louis next summer.

The meeting began as any other (read: boring). Representatives from the city and IMC, which owns Summer Rocks, went through the ordinance that would give the festival exclusive rights to hold large music events downtown every summer for the next twenty years.

Each alderman asked questions, mostly about the controversial non-compete clause, excessive noise and tax revenue. Twenty years is a long time for something like this, but the city doesn't have to pay for any of it and stands to make a ton of money from tax revenue, fees, permits and the like.

The Kennedy public hearing room at city hall was pretty full with reporters, city employees, aging hippies and young activists. People signed up beforehand to speak either in favor or against the ordinance (known as Board Bill #328), though one guy did sign up as "mixed feelings."

One speaker, Aaron Williams, spoke about the importance of recycling and waste management, which is surely a major concern at any big outdoor event. The bill gives Summer Rocks 60 days after the end of the festival to get everything back to normal, which, as one alderman pointed out, is not a crazy amount of time to replant a tree, but is unacceptable in terms of trash cleanup.

Williams also brought plastic cups (the kind you get at a bar or event and probably have a ton of at home right now) to demonstrate his point, but we weren't sure if he was saying they were a waste because they were plastic or they were good because they were reusable. Anyway, we should recycle. A young woman who lives downtown also spoke against the bill because of its lack of deference to the local community. "It's forbidding Lollapaloozas-to-be," she said.

Then came Kociela. For all the talk about Taste of St. Louis' move being unrelated, Kociela's statement blew that out of the water.

"We shouldn't write a law that gives someone a special advantage over local businesses that are playing by the rules. This ordinance is jeopardizing existing, grassroots, local festivals that support the city's cultural history," he told the board. "How is any business supposed to compete when people of influence can dictate legislation that eliminates competition for their own profits? This sets a bad precedent that will discourage businesses like my own from operating in the city."

Kociela was applauded by the audience after his three-minute appeal. Others against Summer Rocks included a representative of the Regional Arts Commission and members of the local blues community.

Pro? Why, someone speaking on behalf of IMC. Imagine that! The board of aldermen still hasn't made a decision though -- the vote was pushed to next week, and it seems there will be additional amendments to the 64-page contact.

Kociela didn't stay to hear speakers who were for Summer Rocks, so we ran after him and asked why he already moved Taste of St. Louis and his other event, Bluesweek, if Summer Rocks wasn't even approved. If it was, it wouldn't start until 2015 anyway.

"Let's just say the writing was on the wall," Kociela told us.

Taste of St. Louis and Bluesweek will take place this year at the Chesterfield Amphitheater on September 19 through 21 and May 24 and 25, respectively. The board of aldermen will vote on Board Bill #328 next week; the earliest it could go to Mayor Slay is April 14.

You can check out our live coverage of the meeting here.