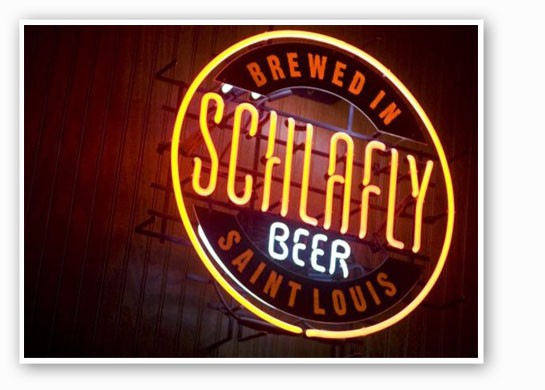 When someone says "Schlafly" here at Gut Check headquarters, we of course think of one thing: beer. The brewery was founded in 1989 by Tom Schlafly and Don Kopman and has since grown to be the biggest craft brewery in the state. The company filed for a federal trademark in 2011 -- no problem, right? Ah, but we can't forget Tom's aunt, Phyllis Schlafly, a conservative activist.

The request for a trademark was filed by Schlafly Beer (under its parent company, the Saint Louis Brewery Inc.) in November 2011; it submitted an application for the trademark of the name as well as the beer bottle label. "The mark has become distinctive of the goods/services through the applicant's substantially exclusive and continuous use in commerce," reads the application.

Schlafly paid a $275 fee, and the application went through the system. It was made public so anyone could file opposition. In July 2012 Phyllis Schlafly did just that, with her son Andrew Schlafly acting as her lawyer. He's also a conservative activist who founded something called "Conservapedia" because he says Wikipedia has an obvious "liberal bias."

Anyway, Phyllis argues that this trademark would be damaging to her. The petition claims Schlafly is "merely a surname." Here's where it gets good:

The word "Schlafly", standing alone, has no usage or meaning other than as a surname. The ordinary or principal significance of the word "Schlafly" is that of a surname, frequently associated with me. In connection with its usage as a surname, it has the connotation of conservative values, which to millions of Americans (such as Baptists and Mormons) means abstinence from alcohol. An average consumer in Saint Louis and elsewhere would think that "Schlafly" is a surname associated with me.

Wait, what? It is illegal under U.S. Trademark law to trademark anything that really is "merely a surname," and the law employs a four-part test to see if that is in fact true (for example, Ford and Miller are both surnames, but also well-known brands that hold trademarks). It mostly depends on how rare the name is and whether it has the "look and feel" of a surname.

Even if it does, though, Schlafly could prove that the brand trumps that and has gained recognition through long-standing use. Despite that, Phyllis Schlafly's opposition argues that "consumers nationwide associate the word 'Schlafly' more with me than with Applicant. A search of news stories nationwide demonstrate that the name 'Schlafly' is primarily used in connection with my activities."

Phyllis Schlafly, 89, is known for her vocal opposition to feminism, the Equal Rights Amendment and her 1964 book A Choice, Not An Echo. You can learn more about her conservative opinions and work here.

Both parties will have the chance to submit evidence, and like many legal proceedings, this has the potential to go on for a long, long time. Other family members have thrown their hats into the ring, too, including Phyllis' son Bruce Schlafly, an orthopedic surgeon here in St. Louis. Schlafly Beer was granted the trademark in July 2013, and it also holds two other, older trademarks on the Schlafly logo.

"We have been selling Schlafly Beer for over 22 years. No one disputes our long-established right to continue to do so," Tom Schlafly said in an official statement yesterday. "The only legal impact of registering the federal trademark is to strengthen the legal protection -- beyond the common-law rights and other trademark rights we already have -- against someone else selling beer under the name Schlafly."

Next: Read both filings in full.