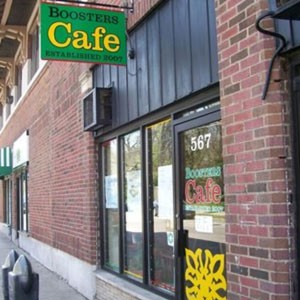 Booster's Cafe (567 Melville Avenue, University City) closed unexpectedly in September after six years in business, but it will reopen as Indian restaurant Taj Mahal as soon as it gets its health inspection.

"I always planned to open a restaurant," says co-owner Merwin Rebello, whose friend owned Booster's Cafe and asked him to take over the space. "I've worked in restaurants all my life. My partner is the chef -- we both used to work at India's Rasoi in the Central West End."

Rebello tells Gut Check it will be mostly modern Indian cuisine. He has changed the decor some from the breakfast-centric Booster's, but most of the money was spent revamping the kitchen. It's not too fancy, he says, but they plan on changing the interior, especially the lighting, once Taj Mahal gets going.

Hopefully, the restaurant will get the OK from the health inspector in the next week or two. Rebello says he's waiting for an update, and if everything goes well Taj Mahal will be open for business.

"The Loop is a nice location," he says. "It's a little smaller place, but I said, start small and grow out."