For Chefs Austin Hamblin and Michelle Allender, Two Minds Are Better Than One 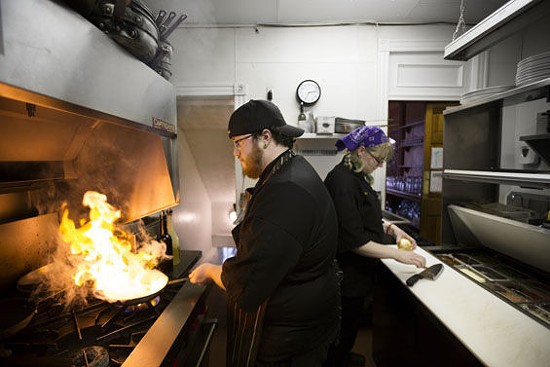 Jackie Miller and Ashley Morrison weren't looking for a package deal when they set out to fill the executive chef position at Bella Vino Wine Bar & Tapas (325 South Main Street, St. Charles; 636-724-3434). But when a former coworker introduced them to Austin Hamblin and Michelle Allender, they decided to take a chance. After all, if two long-time friends Miller and Morrison could share ownership duties, it made sense that the collaborative spirit should extend to the kitchen.

The gamble paid off. Today, Austin and Allender are in charge of a successful kitchen and about to launch a new brunch service, all while trying to avoid knocking into one another in the small space. The two chefs took a break from the kitchen to share their thoughts on rituals, superpowers and the state of the St. Louis dining scene.

See also: Bella Vino, in historic St. Charles, is a meal worth driving for

What is one thing people don't know about you that you wish they did?

Austin Hamblin: If I had to choose one thing it would be that I get my love of cooking from memories of my mother cooking when I was younger.

Michelle Allender: I can also sew. I have been sewing for as long as I can remember. In high school I made most of my dresses for dances.

What daily ritual is non-negotiable for you?

AH: A nice hot shower to wake me up in the morning.

MA: I have two, coffee and a hot shower. I need both to function -- which really me functioning in the morning is just an all around hot mess.

If you could have any superpower, what would it be?

AH: I would like the superpower of being able to control the earth's storms. I've always been fascinated by tornadoes and different storms. It would be cool to be able to control something that naturally powerful.

MA: To fly. I would save so much money not having to buy gas all the time.

What is the most positive trend in food, wine or cocktails that you've noticed in St. Louis over the past year?

AH: I would probably have to say I keep seeing more and more of people taking home-style or rustic, old-world dishes and putting a modern twist on them, and I love it. That and whiskey and food pairings.

MA: I'm a fan of more and more from-scratch kitchens. The whole farm to table helped make that shift in kitchens much more popular. Plus, more people are curing meats, which I love; it's like food is going back to its roots, back to looking like food.

Who is your St. Louis food crush?

AH: Probably Salume Beddu. I love that they have a shop based around curing meats and using what was a dying art and kind of helped make it more popular in our area and pique the customer's interest in different cured meats.

MA: Old Town Spice Shop on Main Street in St. Charles (they are across the street from Bella Vino). It's this tiny shop that is jam packed with so much more than spices, common and uncommon. I buy all of the spices for the restaurant there.

Who s the one person to watch right now in the St. Louis dining scene?

AH: I can't choose any one person. I think the St. Louis dining scene as a whole is on the up and up and is something to be watched.

MA: There are too many to choose from and so many to watch.

Which ingredient is most representative of your personality?

AH: Fresh herbs. I choose fresh herbs to represent my personality because there simple fun and vibrant, and those are some qualities i like to think i have.

MA: Dark chocolate. It's sweet but has a nice earthy bitterness in the finish, which I have been told I am a lot like.

If someone asked you to describe the current state of St. Louis culinary climate, what would you say?

AH: I would say that it currently is on the up and up. I don't believe St. Louis has yet to make its mark on the the dining scene as a whole, but I think that St. Louis is definitely closer than ever to making its mark and showing that St. Louis is a food city too.

MA: It is up and coming. I think that we are in the beginning stages of really being noticed and making an impact. We already are starting to feel the eyes of the culinary world looking upon our city, and I think that the city is definitely showing that we can handle our food.

Name an ingredient never allowed in your kitchen.

What is your after work hangout?

AH: I would have to choose the Brass Rail in O'Fallon. They are open late, serve great simple hot food, and the bartender always has my drink ready before I even get to sit down in my seat.

MA: My bed most nights. Otherwise I am at Fallon's at Olive and 170 -- been going there for years -- or the Brass Rail.

What s your food or beverage guilty pleasure?

What would be your last meal on earth?

MA: My grandma Allender's ham and beans with corn bread, her chicken and dumplings, my grandma Vi's popcorn cake, my sister's quinoa salad, my mom's chocolate cake, my dad's pork steaks, and to wash it all down, my brother's beer that he no longer brews (but it was so good).