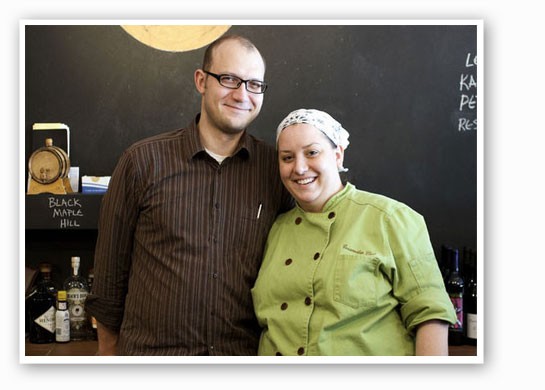 Two former employees of Table and Home Wine Kitchen have filed a lawsuit against owners Cassy Vires and Josh Renbarger, the husband-and-wife team who own both restaurants. Christina Renick and Davina Hernandez are alleging illegal tip pooling which cost them wages.

Tip pools are not uncommon -- servers, who obviously receive their tips directly from the customer will share a portion with other employees, like bussers and hostesses, who come into contact with customers but don't usually get a tip. Tips often allow businesses to pay less than the standard minimum wage (currently $7.50 in Missouri) because employees' income is supplemented.

Though kitchen staff and others don't usually participate in tip pools, it is legal as long as everyone is making minimum wage. The suit also alleges that tips were shared with managers, whom it defines as "employers."

Vires herself tells Gut Check that Table and Home Wine Kitchen do use tip pooling, but she and Renbarger don't get a share of employees' tips. "I think we pay a very fair salary and hourly rate to our employees," she says. "I would hate people to think we pay minimum wage or less than minimum wage."

Neither would the lawyer for the plaintiffs, Russ Riggins, but he says, "They felt their rights were violated. It doesn't have anything to do with their termination."

They're also aiming to turn this into a class-action suit by acting on behalf of the other employees at the two restaurants. Renick and Hernandez are seeking back pay, compensatory and liquid damages, attorneys' fees, and any pre- and post-judgement interest allowed by law.

When we spoke to Vires, she and Renbarger had yet to be contacted by Riggins or received any summons. We chose Vires as our best local chef of 2013 and both restaurants have received rave reviews. Vires says the lawsuit will not affect operations in any way.

Read the full suit below.