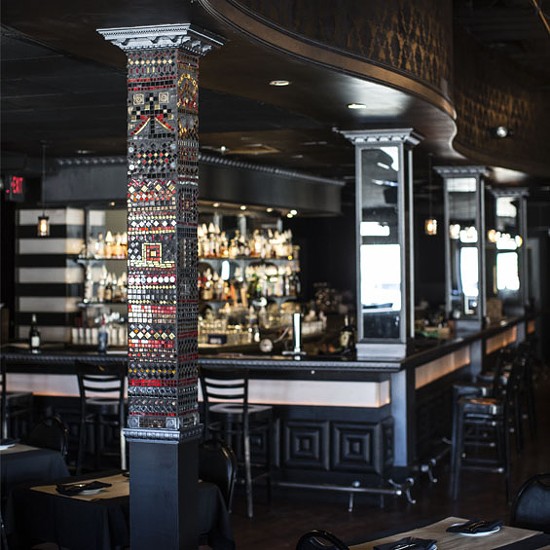 The Crow's Nest owner Mike McLaughlin is at it again in Maplewood, this time with the Blind Tiger (7376 Manchester Road, Maplewood; 314-646-8822), a pizza, ribs and whiskey speakeasy on the prime corner of Manchester and Sutton.

McLaughlin and his team take advantage of this space to host private events -- they've done everything from rehearsal dinners to a fort-making contest. However, as our server explained, the Blind Tiger wants its main focus to be the food.

This week, I visit the Blind Tiger to check out its small but eclectic menu. Here is a sneak preview of my thoughts -- the full review will be online tomorrow and in this week's issue.

The Blind Tiger occupies the spot on the corner of Manchester and Sutton that was formerly the Jumpin' Jupiter cabaret and in addition to operating as a restaurant, is a private events space that has already established a robust business. As a former server who has moved my fair share of furniture, I get that constantly setting up and breaking down events is a pain. However, I assumed that veteran bar owner Mike McLaughlin (of the Crow's Nest and the Bleeding Deacon fame) would have performed some serious feng shui on the place to make it a little more like its namesake - a "blind tiger," the Prohibition-era term for a speakeasy. Some well thought-out furniture, a curtain - anything to give the place the cozy, clandestine vibe that the name implies - would have made it seem less cavernous.

The fact that the ambiance is so off is a shame, because the Blind Tiger serves great food.