Urban farming requires some creative solutions. Groups like the North Side Regeneration Project, Earthdance Farms and Our City Farm are bringing greenery to our concrete landscape. Gateway Garlic Urban Farm is another crusader -- you may know it from the annual St. Louis Garlic Fest, but they also have several other community projects. The latest is a little unusual: gardening with the help of traffic lights.

Gateway Garlic's Mark Brown found a traffic light that had apparently been the victim of a car collision near a friend's house. A new one had been installed, and the old one was just part of the discarded debris swept to the side of the road. Brown snagged it.

He thought he'd fix it and sell it in a garage sale as a novelty item or something, but as he opened up the light, he found not just regular light bulbs but new LED lights. LED is a hot topic in indoor gardening -- Brown himself was first inspired to use them after two botanists began debating about their effectiveness on Gateway Garlic's blog. The idea is that photosynthesis uses primarily red and blue light (hence the green reflection), so LED lights are especially good for indoor plants.

After Brown discovered the fully intact LED lights inside the traffic light, he remembered the botanists' discussion and decided to experiment. He wired up the lights to hang above and planted broccoli, baby kale and re-planted green onion bottoms.

"I assumed it was going to be a failure," Brown says. "What actually happened is the broccoli started fruiting, the onions grew taller than the light and we got a whole thing of baby kale." But it's more than a novelty. Brown works with a group of young north city agrarians he calls "guerilla gardeners," who are, he says, doing a lot with a little. 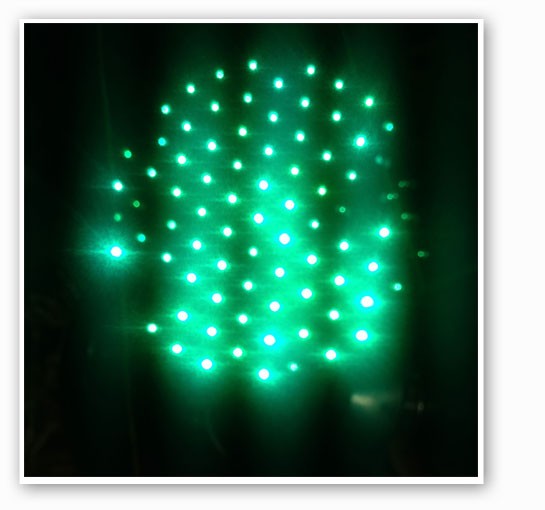 "This isn't the first time I've seen a traffic light in an accident. The city never recycles them," Brown says. "The kids in north city were complaining about the cost of LED lights, and here's how to get it for free." (We've reached out to city officials to find out what they do with old traffic signals and if you could get in trouble for repurposing one. We'll update when we get a comment.)

Gateway Garlic also taught the guerilla gardeners how to graft pear and apple trees onto crabapple trees, turning something unproductive into productive fruit trees. Gateway Garlic also works with a group called Oak Scouts, an alternative to the boy and girl scouts. Brown is giving the traffic light to the scouts and letting them plant the next generation.

"It was just a great way of recycling something that the city didn't want anymore. We actually turned into something useful. We do this to show people you can do this," Brown says. "You're only limited by your imagination and your determination."

Keep up with Gateway Garlic Urban Farm on Facebook and look out for the 2014 St. Louis Garlic Fest on June 21.