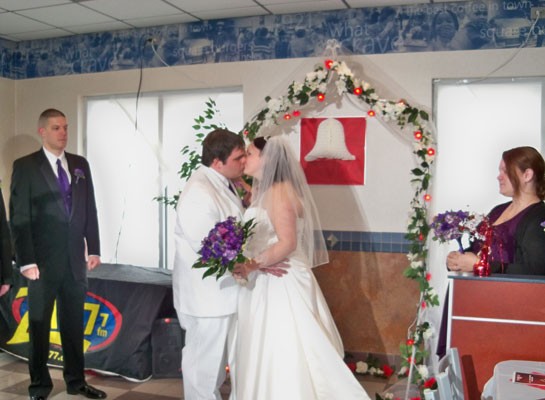 White Castle is a little different from other fast food joints. For one, it's got a lot of history. The first restaurant opened in 1921. It's also got a major cult following -- Harold and Kumar Go to White Castle hit the nail on the head. So somehow it makes more sense that a Belleville, Illinois, couple got married at the home of the steamed slider than at, say, McDonald's.

Kelsey Hallcock and Joe Gillespie were married at the White Castle in the Belleville Crossing Shopping Center on Friday, February 14. They were already planning a wedding, but things moved a little quicker when they applied for a wedding paid for by St. Louis radio station Z107.7. 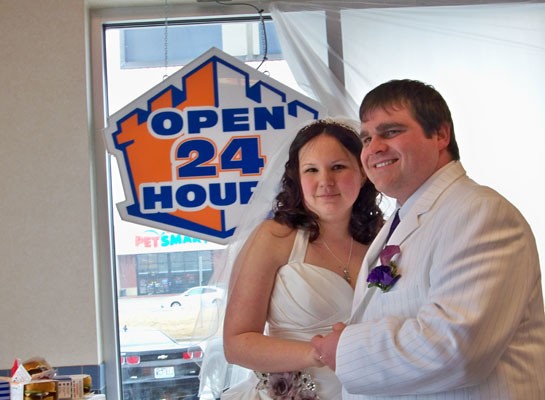 "We've had really not-normal lives," Joe tells us, laughing. "Everybody thought it was great. They were very supportive." Kelsey heard about the contest on the radio and applied just for fun; she wrote a paragraph about why they should be chosen and sent in a photo of the two of them and their five-month-old son, Sammy.

About two weeks later, they got a call saying they'd won the White Castle wedding, and they had fifteen days to prepare. Z107.7 paid for floral arrangements in the restaurant, food (of course), the tux and dress rentals, a limo, photo booth and treats from Jilly's Cupcake Bar. DJ Curt Copeland performed the ceremony in front of Joe and Kelsey's parents, grandparents, cousins and friends.

Afterward, the Gillespies and their guests had a reception at Silver Creek Saloon. They haven't had a honeymoon yet because everything happened so fast, but they're planning a trip to Arizona this summer. Kelsey, 23, and Joe, 29, met over three years ago in math class at Southwestern Illinois College. They had their first official date at White Castle.

"We have a free wedding -- it's my favorite place, free of charge. That was our main thing," Kelsey says. "We can tell our son Mommy and Daddy got married at White Castle!"

"That's what life's about," Joe agrees. "Interesting things that happen that you can tell someone [about] later on in life."

"Don't be afraid to live outside of the norm," Kelsey says.