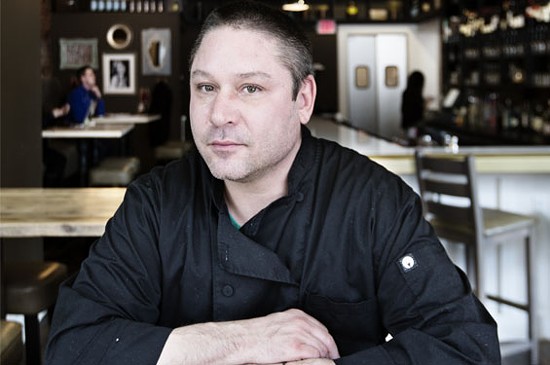 In a city that takes pride in its Italian culinary scene, it's funny to learn that the chef behind the hottest new Italian restaurant cut his chops doing Hawaiian fusion. Justin Haifley, executive chef of the Central West End's Cucina Pazzo (392 North Euclid Avenue; 314-696-8400) doesn't think it's that much of a stretch.

"At Roy's [Hawaiian Fusion Cuisine] I learned how to run the operations of a restaurant and the importance of creating a culture. At Tru in Chicago, I learned technique and finesse. The Italian comes in from my time in New York City. I'd go to Lupa [Mario Batali's restaurant] after I got off work or the chefs there would come to my place. We would swap stories. Italian food isn't all that different from what I've been doing. The hard part, the time consuming part, is making the pasta in house. That's the biggest difference." See also: Cucina Pazzo's "crazy kitchen" puts out insanely good food

Haifley, a 2013 nominee for Food & Wine magazine's "People's Best New Chef: Midwest," returned to St. Louis (although not a native, he grew up here) after fifteen years spent cooking across the country. He spent time in New York City, Chicago, Hawaii and San Diego before coming back to town to head up culinary operations for OG Hospitality Group, the force behind the Tavern Kitchen & Bar, the Corner Pub & Grill, the Shack Pubgrub and, now, Cucina Pazzo. When asked how the scene had changed during his time away, Haifley is excited about what he sees. "The scene has really excelled in the last fifteen years. There is so much more talent. The city is filled with small-scale restaurateurs."

The scene may be exciting, but if there is one thing that won't change, it's St. Louis' proximity to the coasts. How does this chef who is famous for his seafood manage in a landlocked town? "Really, it's about connecting with my purveyors and developing trust. They know what to send and what not to send. They know that I know quality, so they know what to bring me."

So the seafood issue is manageable, but there is one thing that is causing Haifley grief. "It's this weather," he laughs. "I've spent the last several years living in some of the best weather in the country. I was in Florida, San Diego, Hawaii. It's killing me."