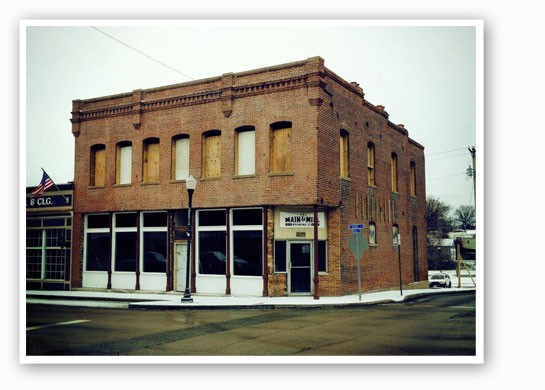 Main & Mill Brewery (240 East Main Street, Festus; 314-603-0924) in Festus is one of the openings we're most looking forward to this year. We know it's still pretty early, but we checked in on the progress with co-owner Denny Foster.

Construction on the nineteenth century building that will house the brewery is major and ongoing, but Foster was able to give us a (tentative) opening date.

Main & Mill is set to open September 1, 2014. Some of the brewing equipment has just been ordered from Portland Kettle Works -- Foster calls it a "big milestone." Although construction is the main concern now, Foster says it's been going well and without any setbacks.

"We are searching for the perfect corner doors before we begin changing the corner entrance, which will meld with the sort of the look we have going with the front," Foster says. "The rest of our windows should be installed in the next three weeks or so, really changing the look of the entire building."

Foster and his father, Barry, bought the 1800s building in Festus despite the work they knew it needed. One of their main goals was to use as much of the original building as possible repurpose all they can. Recently, they have been able to remove some of the interior walls, which were made of true rough oak in the 1880s.

The boards were saved and will be used to make table tops. If they have enough, Foster hopes to make bar tops out of the same wood, similar to a nineteenth-century butcher's block. The team has also been doing a lot of digging in the basement rooms, which currently have dirt floors, to make room for the brewing equipment.

Main & Mill is participating in its first St. Louis-based festival in just a few weeks at the Centennial Beer Festival, February 20 to 22. It will be the first chance for a lot of people (including us) to try Main & Mill's first brews. The festival, at Moulin Events (2017 Chouteau Avenue; 314-241-4949), will host over twenty local breweries and 200 beers.

"It's opportunity to get some feedback on our beers from some of the biggest beer lovers in the country," Foster says.