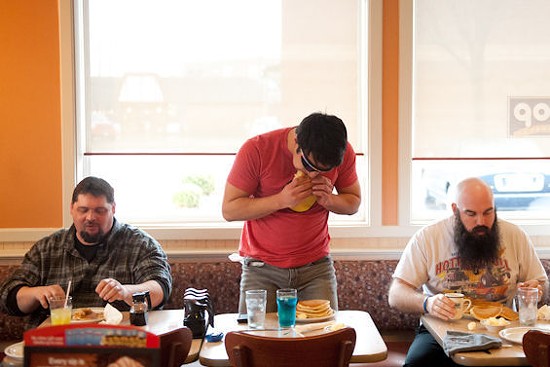 Forget wings -- for some this Super Bowl weekend, it was all about pancakes. On Saturday, competitive eaters gathered at International House of Pancakes locations around the country for the first ever Pancake Bowl. St. Louis was no exception.

An eclectic crowd of men -- some bearded, some wearing cut-off t-shirts -- descended on the St. Peters location, each one hoping to win the title of regional pancake eating champion. Some qualified by holding records at other IHOP locations. Mounds of butter and pools of syrup were served as the towers of pancakes toppled. Truly an epic competition, it all came down to the final seconds and the final pancake.

See also: The 6 Toughest Eating Challenges in St. Louis and One Foolish Man's Attempt to Beat Them All

In the weeks leading up to the competition, a rivalry built up between local competitive eaters Kyle "The Hammer" Hanner and P.J. Brennan. The men battled back and forth at the Clayton IHOP, hoping to the claim the record and qualify for the final competition. Hanner started things off by scarfing nineteen pancakes in twenty minutes, but was quickly usurped later that night by Brennan's twenty-three. Undaunted, Hanner returned the next day and went on to eat 26 before Brennan ultimately walked away victorious, consuming a total of thirty. Lucky for Hanner, he already holds record at three other local IHOPs, so the two would met again at Saturday's finals. At stake: a $500 coupon to any IHOP restaurant and major bragging rights.

An hour before the finals were set to begin, Hanner arrived from Dubuque, Iowa, where he'd just won a wing-eating contest: 2.9 pounds in five minutes. Sporting a t-shirt emblazoned with a hammer and a pair of sunglasses, he looked a bit tired, but focused. Relative to his competition, he's slender -- a physique that belies truly inspiring eating abilities. Four other competitors join him in the back of the restaurant, surrounded by over twenty spectators and staff.

Five pancakes were set in front of each competitor, along with two cups of water. As the final plate hit the last table, the men begin eating at a furious pace. After a few cries of encouragement, the crowd went silent, standing in awe -- or maybe disgust? Hanner used both hands to grasp the stack of pancakes like a sandwich. He took three rapid bites, chewed and then drank it all down. Meanwhile, Brennan tore off chunks and kept a solid pace, glancing at his watch periodically.

With ten minutes left, everyone started to slow down. At this point, Brennan and Hanner separated themselves from the pack, pushing forward. Before pancake number twenty, Hanner stands up. He looked like he might be in trouble, the unleashed a massive belch. He promptly sat back down and grabbed the next stack.

Entering the final 30 seconds, Brennan and Hanner are both on number 24 -- no one else is close. Number 25 seemed to stick in Hanner's throat, and his brief struggle was the opening Brennan needed -- he chomps down and surges ahead, eating 26 to Hanner's 25.

After the dust clears, Hanner was "pretty stuffed" and Brennan complained of "dry-mouth." They both offered congratulations, admitting that they closely watched the other as the competition progressed. "We were conscious of how much the other could eat," Brennan explained.

Having taken in roughly 2,800 calories, Hanner said he "plans on sleeping a lot," but was looking forward to his next competition. Brennan -- who ate at an average rate of 1/3 pancake per minute -- anticipates retirement.

"My wife is probably going to make me hang up the utensils and go back to a healthy living style."