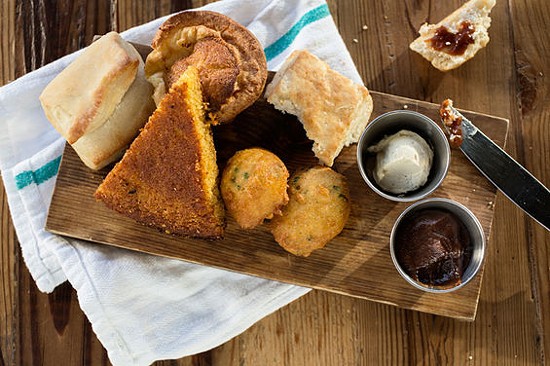 Gut Check is counting down the 100 dishes in St. Louis that you must eat right now.

When chef John Perkins started doing underground dinners, he was a theology student who never planned on opening his own place. Now he's in the kitchen full-time at his first permanent restaurant, Juniper (360 North Boyle Avenue; 314-329-7696).

I once asked Perkins if he saw any parallels between theology and cooking, and he said, 'yes' -- that the foundation of the Christian experience is the sharing of a meal together. It's breaking bread. I can't help but wonder if this was a subliminal inspiration for Juniper's breadbasket, which is one of the best assemblage of baked goods I have ever had.

Juniper charges $9 for the full basket ($5 for the half), and believe me, it is worth every penny. The basket (actually, it's more of a board) contains flaky buttermilk and angel biscuits, savory popovers, corn bread fresh from the cast iron skillet and the most magnificent hush puppies I've had the pleasure of experiencing. Seasonal jams and butters round out the bread service, making this a feast in itself.

Give us, chef Perkins, our daily bread.